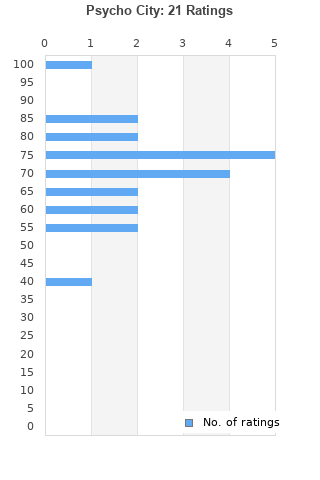 Psycho City is ranked 6th best out of 19 albums by Great White on BestEverAlbums.com.

The best album by Great White is ...Twice Shy which is ranked number 8447 in the list of all-time albums with a total rank score of 139. 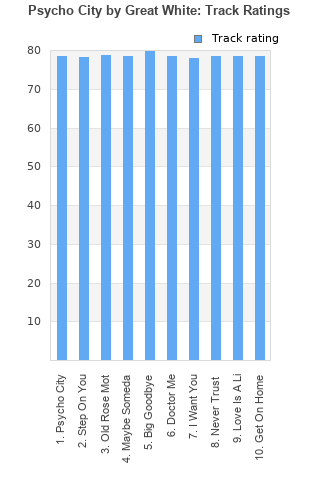 Rating metrics: Outliers can be removed when calculating a mean average to dampen the effects of ratings outside the normal distribution. This figure is provided as the trimmed mean. A high standard deviation can be legitimate, but can sometimes indicate 'gaming' is occurring. Consider a simplified example* of an item receiving ratings of 100, 50, & 0. The mean average rating would be 50. However, ratings of 55, 50 & 45 could also result in the same average. The second average might be more trusted because there is more consensus around a particular rating (a lower deviation).
(*In practice, some albums can have several thousand ratings)
This album has a Bayesian average rating of 71.5/100, a mean average of 70.7/100, and a trimmed mean (excluding outliers) of 70.7/100. The standard deviation for this album is 13.2.

Its a real tragedy that this album came out in 1992. The grunge explosion made it totally uncool to listen to anything remotely pop metal or hair metal. This was Great White's best album and it got swallowed up by the changing times. This is not just a great pop metal album, it is a great blues-rock album in the tradition of the 70s classics. Fans of guitar oriented rock deserve to give this one another chance.

Your feedback for Psycho City