Wish (studio album) by The Cure 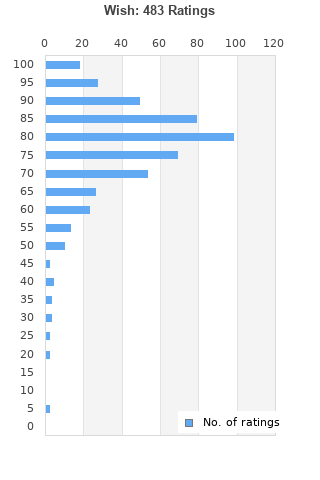 "WISH" by The Cure (CD, Apr-1992, Elektra (Label))
Condition: Good
Time left: 13h 48m 37s
Ships to: Worldwide
$1.97
Go to store
Product prices and availability are accurate as of the date indicated and are subject to change. Any price and availability information displayed on the linked website at the time of purchase will apply to the purchase of this product.  See full search results on eBay

Wish is ranked 6th best out of 35 albums by The Cure on BestEverAlbums.com.

The best album by The Cure is Disintegration which is ranked number 35 in the list of all-time albums with a total rank score of 31,295. 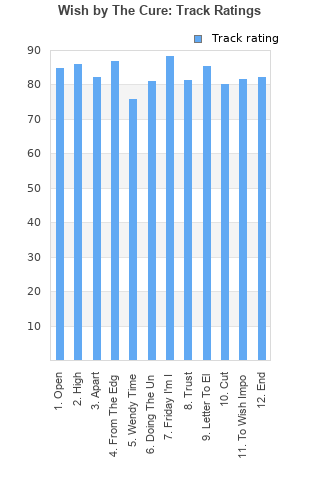 From The Edge Of The Deep Green Sea
Rating: 86 (106 votes)Comments:

Rating metrics: Outliers can be removed when calculating a mean average to dampen the effects of ratings outside the normal distribution. This figure is provided as the trimmed mean. A high standard deviation can be legitimate, but can sometimes indicate 'gaming' is occurring. Consider a simplified example* of an item receiving ratings of 100, 50, & 0. The mean average rating would be 50. However, ratings of 55, 50 & 45 could also result in the same average. The second average might be more trusted because there is more consensus around a particular rating (a lower deviation).
(*In practice, some albums can have several thousand ratings)
This album is rated in the top 4% of all albums on BestEverAlbums.com. This album has a Bayesian average rating of 77.5/100, a mean average of 76.6/100, and a trimmed mean (excluding outliers) of 77.6/100. The standard deviation for this album is 14.3.

When you thought it couldn't get dreamier...

I love the bass on this one.

Usually I don't like 7 minute tracks, because often it means they just glue 3 songs together, or it becomes boring and they excuse it with saying "it's drone, you don't get it"; these guys simply know how to create a flow that can be enjoyed for 7+ minutes.

My favourite Cure album, From the Edge is epic.

This album grew on me so much, and continues to grow on me, with time. For example; I just realized how dope "End" is after a years-worth of listens to this LP.

This one is soft, almost relaxing, and still emotional. What more can be asked from an album like this? An underrated gem of the Cure, their best album behind Desintegration.

I liked b-sides more than album itself, but LP is amazing too.
Favourite: "From The Edge Of The Deep Green Sea"
Least: "Wendy Time"

Their best. Kill me if you want. From the Edge is their best, and Open is one of the most unsettling songs I've ever heard.

This album is among some of The Cure's bests without much doubt.

One of the lighter Cure albums. Some stunning songs here, especially in, Friday I'm in love, and, letter to Elise. Wish, is slightly overlong and could have been cut a few tracks, but it's still enjoyable. This is the last of the great Cure albums, they made some okay records after this but maybe this is where they should have called it a day.

2nd best album by the cure after disintegration!!

Controversial opinion, perhaps... but for me "Wish" stands only behind "Disintegration" as The Cure's finest album. Can't think of another album's two book-end tracks that I love as much as "Open" and "End."

Your feedback for Wish