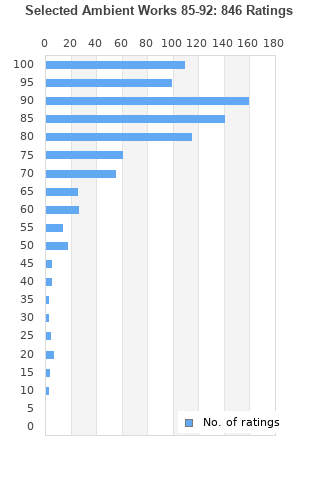 Selected Ambient Works 85-92 is ranked as the best album by Aphex Twin. 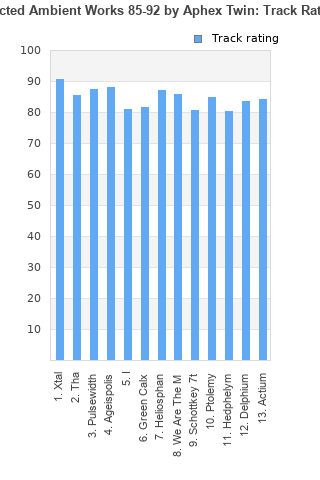 Rating metrics: Outliers can be removed when calculating a mean average to dampen the effects of ratings outside the normal distribution. This figure is provided as the trimmed mean. A high standard deviation can be legitimate, but can sometimes indicate 'gaming' is occurring. Consider a simplified example* of an item receiving ratings of 100, 50, & 0. The mean average rating would be 50. However, ratings of 55, 50 & 45 could also result in the same average. The second average might be more trusted because there is more consensus around a particular rating (a lower deviation).
(*In practice, some albums can have several thousand ratings)
This album is rated in the top 1% of all albums on BestEverAlbums.com. This album has a Bayesian average rating of 83.4/100, a mean average of 82.1/100, and a trimmed mean (excluding outliers) of 83.5/100. The standard deviation for this album is 15.9.

Amazing record. It is as if James has internalized all developments in the British house scene of that time to arrive at this introspective masterpiece. I can hear elements of acid house, ambient, techno, etc. Genre: Post-House? Sounds less pretentious than 'intelligent dance music'.

That's about as good as I can appreciate ambient music.

A masterclass in soundscapes from the greatest electronic musician to ever grace the planet...

It's very possible that I'm too naive to enjoy this. Having said that, this doesn't function as anything more than background music for me. I don't feel really any emotions when listening. I've given it a fair share of spins but it's just not doing it for me. I wish I knew why I didn't like it but I don't. It's possible that I find this type of computer generated too perfect, I guess, but I think that's unlikely. I can assure you that it is not a disdain for instrumental pieces. Maybe I'll get it someday.

Aphex Twin is one of the greatest legend in the history of electronic music. In the 90s, he created an innovative sound with "Selected Ambient Works", a revolutionary album that is Today a classic.
This album is the biggest pillar of electronic music, that's for sure. In 1992, Richard D. James did not know that he was going to become one of the greatest and most original electronic composer. The electronic loops are smooth and very well composed. This creates a terrifying and relaxing atmosphere. The album also uses the sample as in The track "We are the music makers" which sample a tirade of the movie Charlie and the Chocolaterie. This album is a masterpiece!

There is plenty of legend surrounding this album, and I'm not about to trot out the usual cliches here, but this album stands out as an electronic tour de force, with its soft beats, burbling basslines and washes of colour. It is a record which improves listen upon listen too, so no matter how much you enjoy it at first, by the time you've had it a few years, you'll appreciate it even more. Best tracks: Xtal, Ageispolis, Heliosphan, Ptolemy

Your feedback for Selected Ambient Works 85-92