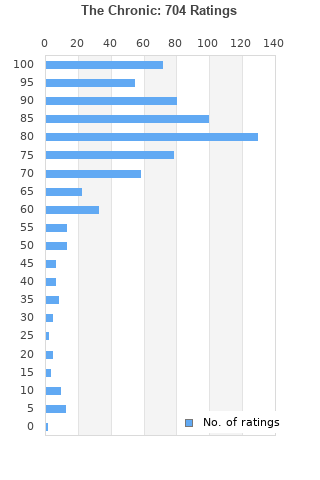 DR. DRE-The Chronic (Clean Version) CD NEW
Condition: Brand New
Time left: 6h 53m 28s
Ships to: Worldwide
$20.86
Go to store
Product prices and availability are accurate as of the date indicated and are subject to change. Any price and availability information displayed on the linked website at the time of purchase will apply to the purchase of this product.  See full search results on eBay

The Chronic is ranked as the best album by Dr. Dre. 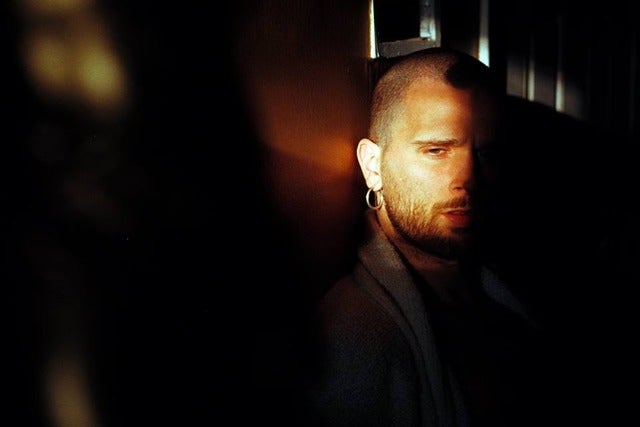 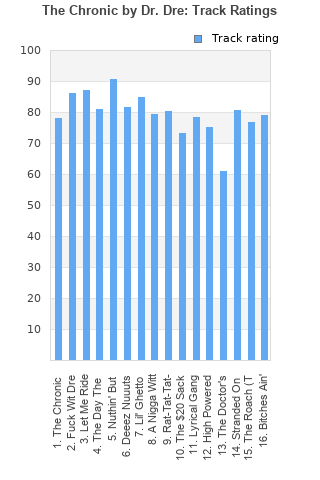 Rating metrics: Outliers can be removed when calculating a mean average to dampen the effects of ratings outside the normal distribution. This figure is provided as the trimmed mean. A high standard deviation can be legitimate, but can sometimes indicate 'gaming' is occurring. Consider a simplified example* of an item receiving ratings of 100, 50, & 0. The mean average rating would be 50. However, ratings of 55, 50 & 45 could also result in the same average. The second average might be more trusted because there is more consensus around a particular rating (a lower deviation).
(*In practice, some albums can have several thousand ratings)
This album is rated in the top 2% of all albums on BestEverAlbums.com. This album has a Bayesian average rating of 79.4/100, a mean average of 76.8/100, and a trimmed mean (excluding outliers) of 79.5/100. The standard deviation for this album is 20.4.

I don't like this very much but yes the production is amazing especially for its time. Some of the content is wack. Fuck Wit Dre Day is no longer relevant... This album is still a classic and I enjoy a lot of the instrumentals better.

Brilliant g funk classic set the stage for the next 15 years of rap. a truly innovative funk laden classic celebrating all the makes cali great. Women Weed ad Weather. Still influencing hip hop over 25 years later. A true classic from the day it was issued. Introduced Calvin Broadus aka Snoop Dogg to the masses.

Between all the angry, shouting rappers, suddenly Snoop Dogg arises, makes a gesture with his right hand as if he’s steering a wheel and goes “bow wow wow yippie yo yippie yay”.

Production is of course groundbreaking.

Your feedback for The Chronic