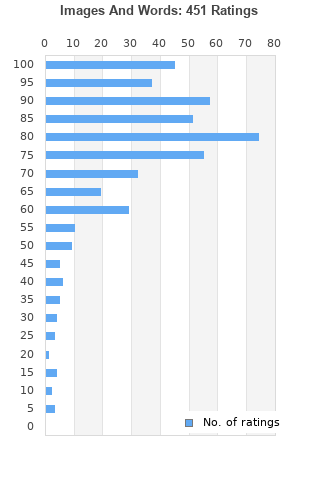 Images And Words is ranked 2nd best out of 35 albums by Dream Theater on BestEverAlbums.com.

The best album by Dream Theater is Metropolis Pt. 2: Scenes From A Memory which is ranked number 667 in the list of all-time albums with a total rank score of 2,808. 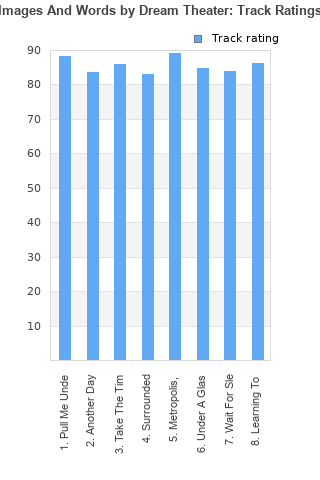 Metropolis, Pt. I: The Miracle And The Sleeper
Rating: 89 (96 votes)Comments:

Rating metrics: Outliers can be removed when calculating a mean average to dampen the effects of ratings outside the normal distribution. This figure is provided as the trimmed mean. A high standard deviation can be legitimate, but can sometimes indicate 'gaming' is occurring. Consider a simplified example* of an item receiving ratings of 100, 50, & 0. The mean average rating would be 50. However, ratings of 55, 50 & 45 could also result in the same average. The second average might be more trusted because there is more consensus around a particular rating (a lower deviation).
(*In practice, some albums can have several thousand ratings)
This album is rated in the top 3% of all albums on BestEverAlbums.com. This album has a Bayesian average rating of 78.4/100, a mean average of 76.9/100, and a trimmed mean (excluding outliers) of 78.5/100. The standard deviation for this album is 18.8.

The first half of this album is amazing but the second half just doesn't maintain that quality in my opinion. The instrumentation is very consistent and every song is packed full of amazing guitar and drum work that really stuns me. Some tracks just completely overpower you at times and they almost have too much going on at one time so it feels a bit confused. Its the slower tracks that really shine for me and when they go at a slower tempo the quality is far better. Despite this, my favourite song was probably Pull Me Under which opens the record and gets you so excited with how brilliant it is. The songs are a little repetitive though and that makes the album drag as you feel you are listening to the same song for a lot of the run time. Overall, this is probably the groups best album as it has some great moments but it just struggles to build upon those moments.

One of the best Prog-Metal album

Much as I like Dream Theater, I feel that with a lot of their work, they are trying to cram every idea possible into an album and sometimes even into one track. I personally like the slower more melodic affairs like 'Another Day' and 'Wait For Sleep', the latter with its moving piano and subtle strings is far too short. I get a sense with the heavier tracks, that Mike Portnoy wants to bash the absolute shit out of his kit and prove something with the speed of his double kick drum pedal. It is without doubt, a complex album which needs a few listens to truly appreciate the musicianship because in a lot of parts it sounds too cluttered. I think that if they had stripped the sound back a bit it would have been awesome.

The musicianship is incredible, I can see why Dream Theater have such a devoted fan base. This is so fast and complex, there's enough material for five albums here. It's too fast for me, it feels like they are trying to play as fast as possible to cram so many ideas into the album's run time. I don't like too much repetition but this is taking it to the extreme, if I heard a 10 second part of any of these tracks I would be hard pressed to identify which track it was from (much like most of Yes). I need to listen more to take it all in, (but those drums are irritating as hell).

What a melodic beast of an album. Equally complex, accessible and enjoyable which cannot be said about many prog (metal) albums.
Favourite songs: Under A Glass Moon, Learning To Live, Metropolis, Take The Time

I gave this an honest to God shot but it just didn't take, I'm sorry. I know it's supposed to be prog-metal but it was a bit too proggy for me, this album could've used a lot more straightforward metal. Portnoy is an amazing drummer and there's a lot of good guitar-work too but the singer sounds like he tries to sound like Geddy Lee at times. I think of Dream Theater as a metal Rush anyway... It's just a bit slow and dramatic for me. Production is too clean, if it wasn't for the distorted guitars this could've easily been a poprock album.

I'm sorry to fans of this album, I honestly didn't hate this album. At all. But I definitely don't appreciate it like most of you. I'll probably give this another chance soon but for now: 7,5/10. I'd rather listen to prog-metal like Tool.

To be honest, this album is pretty overrated in the Dream Theater fanbase, but my god, is it still solid. I simply don´t like the very early sound this band had, even if they had all the ingredients to be epic. And my god, they were epic.

Until 1992, I thought there would never be another rock album that would blow me away like Moving Pictures did in 1981. DT came out and absolutely rocked my world. This album was an absolute musical revelation, with complex composition, incredible musicianship, refreshing songwriting, and outstanding personnel at every position who all somehow still come out better than the sum of their parts. Every last song is not just a keeper, but of the very highest order. No matter how many times I listen to this album, it seems fresh and is always welcome.

Your feedback for Images And Words