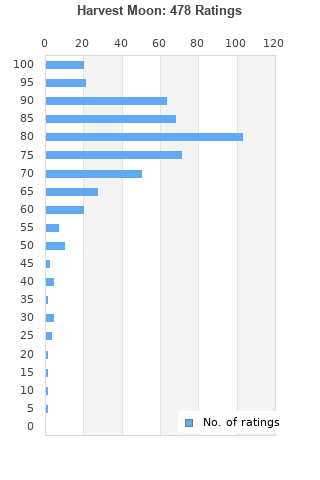 Harvest Moon is ranked 5th best out of 81 albums by Neil Young on BestEverAlbums.com.

The best album by Neil Young is After The Gold Rush which is ranked number 78 in the list of all-time albums with a total rank score of 18,395. 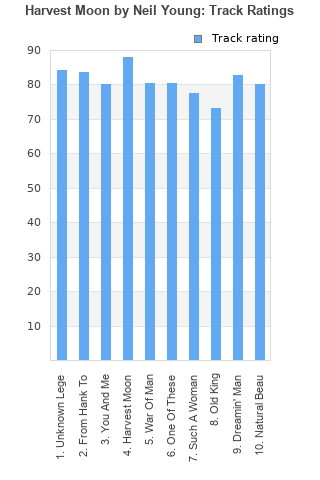 Rating metrics: Outliers can be removed when calculating a mean average to dampen the effects of ratings outside the normal distribution. This figure is provided as the trimmed mean. A high standard deviation can be legitimate, but can sometimes indicate 'gaming' is occurring. Consider a simplified example* of an item receiving ratings of 100, 50, & 0. The mean average rating would be 50. However, ratings of 55, 50 & 45 could also result in the same average. The second average might be more trusted because there is more consensus around a particular rating (a lower deviation).
(*In practice, some albums can have several thousand ratings)
This album is rated in the top 3% of all albums on BestEverAlbums.com. This album has a Bayesian average rating of 78.3/100, a mean average of 77.2/100, and a trimmed mean (excluding outliers) of 78.4/100. The standard deviation for this album is 14.3.

Neil's heralded follow-up to the Harvest LP, with many people from those sessions reprising their roles.

The results are decent. Aside from retreading You and Me (sounds too much like Old Man), the record takes solid songs and treats them with light acoustic production.

Side One is mostly great, especially the dark War of Man. Side Two has Jack Nitzsche returning to arrange the disappointing Such a Woman. There's also the hokey Old King, for fans who enjoy disciplining dogs. Natural Beauty would be great if it was less than four minutes, but Dreamin' Man and One of These Days make up for the disappointments.

Despite the flaws, it's one of Neil's finest country-folk records. Highly Recommended.

A Side: Harvest Moon
B Side: From Hank to Hendrix

Harvest Moon could possibly be Neil Young's most subdued record. Harvest Moon gets labelled the sequel to Harvest, and the two albums share a lot of musicians. Some of Neil's most personal songs are featured here and the highlights are rivals to some of the best songs in his catalogue. The mood stays a bit more consistent than Harvest because there's no rockers like Alabama. The more I've heard this record the more I've enjoyed it.

Neil Young finally brings us the sequel to Harvest, which his record label had been begging for (basically on their hands and knees) the entirety of the last decade. And it does not disappoint. Harvest Moon is lush, nostalgic, and heavenly. The title track, Unknown Legend, and Natural Beauty are the highlights, but every song on the record is worth a listen. This is easily in his top ten.

Neil Young has a knack for making exactly the album his most ardent fans don't want at any given moment. In 1992, on the heels of what was arguably his loudest, most feedback-drenched tour, the one that produced the live albums Arc and Weld, Neil Young recorded...a folk album? The sequel to his then twenty-year-old Harvest? The thing is, Harvest Moon is great. These are some of the warmest, most endearing, most emotionally vulnerable songs of Neil's career. I especially love "From Hank to Hendrix," which might sound a tad dated now (the reference to Madonna as a sex symbol seems almost hopelessly retro) but is still one of my favorite songs to play on the guitar.

A decent Neil Young album, but certainly nothing special. A little to bit safe to be honest, but pleasant enough.

After turning up the gain on two albums (what's with other people saying this marked a break from 80's experimentalism? Did they forget about Freedom and Ragged Glory?), Neil slows things down with this return to country rock and, what do you know, the old man's still got it!

Neil finally ditches (excuse the pun) the 80's junk he did in this collection of fantastic country-infused tracks that hobble and lope along like resolute cripples. Side two a bit lame (excuse the pun) compared to the stunning opening four tracks.

Your feedback for Harvest Moon