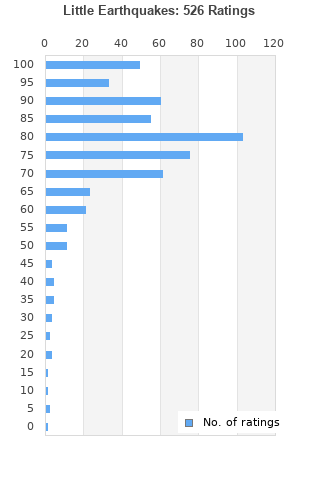 TORI AMOS - LITTLE EARTHQUAKES NEW VINYL RECORD
Condition: New
Time left: 14h 17m 21s
Ships to: Worldwide
$48.77
Go to store
Product prices and availability are accurate as of the date indicated and are subject to change. Any price and availability information displayed on the linked website at the time of purchase will apply to the purchase of this product.  See full search results on eBay

Little Earthquakes is ranked as the best album by Tori Amos. 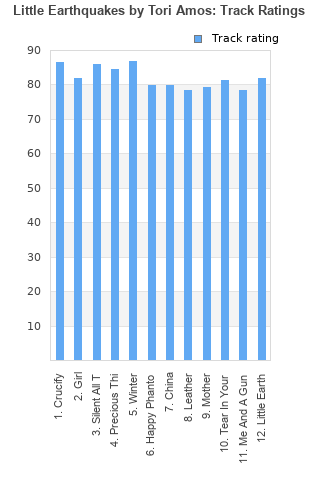 Silent All These Years
Rating: 86 (107 votes)Comments:

Rating metrics: Outliers can be removed when calculating a mean average to dampen the effects of ratings outside the normal distribution. This figure is provided as the trimmed mean. A high standard deviation can be legitimate, but can sometimes indicate 'gaming' is occurring. Consider a simplified example* of an item receiving ratings of 100, 50, & 0. The mean average rating would be 50. However, ratings of 55, 50 & 45 could also result in the same average. The second average might be more trusted because there is more consensus around a particular rating (a lower deviation).
(*In practice, some albums can have several thousand ratings)
This album is rated in the top 2% of all albums on BestEverAlbums.com. This album has a Bayesian average rating of 78.8/100, a mean average of 77.7/100, and a trimmed mean (excluding outliers) of 78.9/100. The standard deviation for this album is 16.4.

Kate Bush definitely comes to mind when trying to draw a comparison (especially on China), but there's also a distinct alt rock attitude throughout.

Magnific album. From the first listen, I have feel in love with Tori's voice. I'm definitively going to listen to the rest of her discography.

Excellent album not weak track on it. A very talented singer/ song writer.

Powerful, but only right for a certain mood.

I usually find it hard to relate with a female singer/songwriter, but her simple and direct approach is quite effective.

One of Her best

Although I prefer the fuller sound and more cryptic lyrics of the next two albums, it's hard to deny how powerful the girl-and-a-piano confessional approach is. This is an impressive debut.

Little earthquakes, is one of the most spectacular and stunning albums ever. A, blue, for the nineties, every song is a masterpiece. Amos has no qualms about dealing with extremely dark subjects including domestic abuse in, silent all these years, and off course her own terrible rape ordeal in, me and a gun. There's no weak tracks here but some of my personal favourites are, winter, China, crucify, tear in your hand, and the epic title track. A beautiful and courageous record destined to be a classic. Superb.

I was like 8 years old when I heard Silent All These Years for the first time and it really blew my mind. The story was so heartbreaking. Still one of the most beautiful songs I've ever heard.

Your feedback for Little Earthquakes