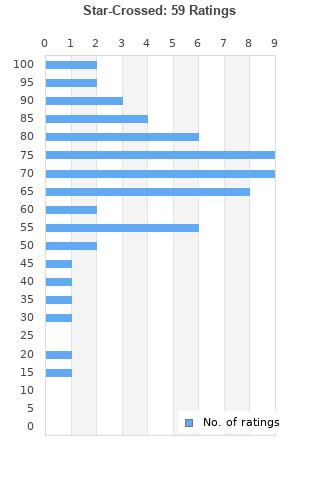 Kacey Musgraves STAR-CROSSED Limited NEW VINYL LP RECORD Lots of hits
Condition: New
Time left: 14h 52m 56s
Ships to: Worldwide
$5.00
Go to store
Product prices and availability are accurate as of the date indicated and are subject to change. Any price and availability information displayed on the linked website at the time of purchase will apply to the purchase of this product.  See full search results on eBay

Star-Crossed is ranked 4th best out of 6 albums by Kacey Musgraves on BestEverAlbums.com.

The best album by Kacey Musgraves is Golden Hour which is ranked number 740 in the list of all-time albums with a total rank score of 2,551. 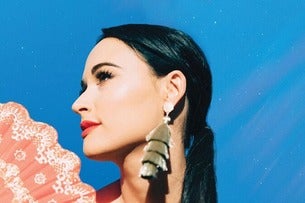 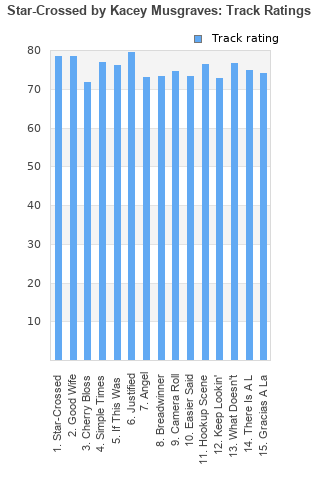 Rating metrics: Outliers can be removed when calculating a mean average to dampen the effects of ratings outside the normal distribution. This figure is provided as the trimmed mean. A high standard deviation can be legitimate, but can sometimes indicate 'gaming' is occurring. Consider a simplified example* of an item receiving ratings of 100, 50, & 0. The mean average rating would be 50. However, ratings of 55, 50 & 45 could also result in the same average. The second average might be more trusted because there is more consensus around a particular rating (a lower deviation).
(*In practice, some albums can have several thousand ratings)
This album has a Bayesian average rating of 73.4/100, a mean average of 71.2/100, and a trimmed mean (excluding outliers) of 73.5/100. The standard deviation for this album is 17.8.

It's not the lightning in a bottle that the first half of Golden Hour was but she's still a really nice songwriter w/ a winning pop country sounding voice. It's pretty solidly pop here genre-wise pulling bits and pieces from other genres when it's needed: weird vocal effects and autotune, some electronica-inspired synths, samples & beats here and there, but it's typical pop structures w/ a really reverb heavy psychedelic feeling we're used to hearing from Kacey at this point.

Some corny lyrics, and certain tracks in the middle of the album feel pretty cliché or unoriginal. This doesn't strike me personally as a dramatic shift in artistic direction for here or like it's particularly making any sort of statement. I think these are honest songs from Kacey detailing an unfortunate antithesis: the ending of the (presumably same?) relationship she blissfully described on Golden Hour in her divorce with Ruston Kelly. In fact, the worst thing about this in fact it's almost invalidating to her best tracks "Slow Burn" "Oh, What A World" or perhaps it's relieving that it's validation those sentiments and emotions expressed in those songs are at best fleeting and temporary.

Your feedback for Star-Crossed