The Tipping Point (studio album) by Tears For Fears 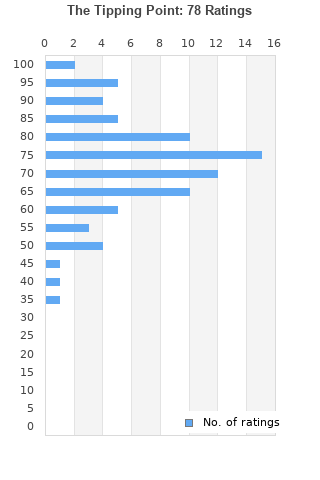 The Tipping Point is ranked 5th best out of 10 albums by Tears For Fears on BestEverAlbums.com.

The best album by Tears For Fears is Songs From The Big Chair which is ranked number 366 in the list of all-time albums with a total rank score of 5,209. 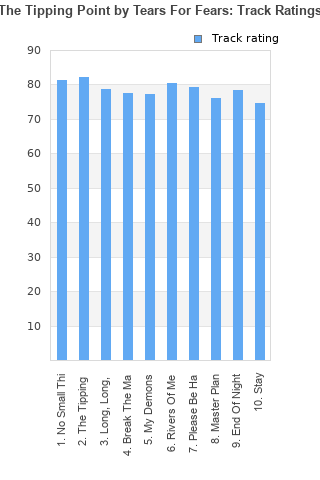 Rating metrics: Outliers can be removed when calculating a mean average to dampen the effects of ratings outside the normal distribution. This figure is provided as the trimmed mean. A high standard deviation can be legitimate, but can sometimes indicate 'gaming' is occurring. Consider a simplified example* of an item receiving ratings of 100, 50, & 0. The mean average rating would be 50. However, ratings of 55, 50 & 45 could also result in the same average. The second average might be more trusted because there is more consensus around a particular rating (a lower deviation).
(*In practice, some albums can have several thousand ratings)
This album has a Bayesian average rating of 72.4/100, a mean average of 72.2/100, and a trimmed mean (excluding outliers) of 72.2/100. The standard deviation for this album is 13.0.

Tears For Fears’ latest offering is one of top class songwriting and sumptuous production, proving age really is just a number…

Along with Judy Collins, this is my most surprising release from a legacy act in 2022.

It has been a long, long, long time since we got some new music from this group. Apparently Tears for Fears is still active, despite releasing their last crackerjack of an album back in 2004.

The Turning Point is a fiery comeback, with excellent production that honors the 80s period and adding modern touches.

InNot too much stands out material-wise on The Tipping Point. The songwriting is kind of average, but the production and execution are well worth a listen.

Really good for an 80s band releasing in 2022. No Small Thing is my favorite single of the year so far, it's so good and uplifting!

Your feedback for The Tipping Point