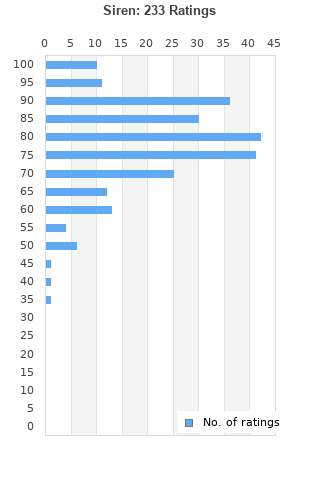 Siren is ranked 6th best out of 17 albums by Roxy Music on BestEverAlbums.com.

The best album by Roxy Music is For Your Pleasure which is ranked number 503 in the list of all-time albums with a total rank score of 3,848. 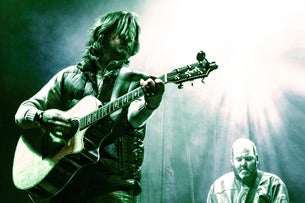 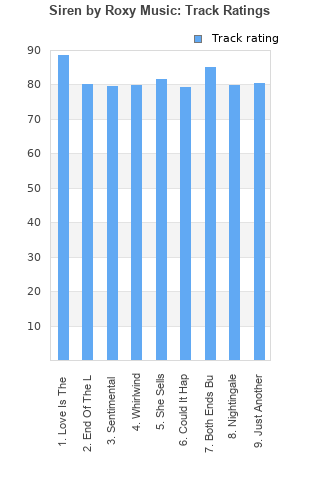 Rating metrics: Outliers can be removed when calculating a mean average to dampen the effects of ratings outside the normal distribution. This figure is provided as the trimmed mean. A high standard deviation can be legitimate, but can sometimes indicate 'gaming' is occurring. Consider a simplified example* of an item receiving ratings of 100, 50, & 0. The mean average rating would be 50. However, ratings of 55, 50 & 45 could also result in the same average. The second average might be more trusted because there is more consensus around a particular rating (a lower deviation).
(*In practice, some albums can have several thousand ratings)
This album is rated in the top 2% of all albums on BestEverAlbums.com. This album has a Bayesian average rating of 79.2/100, a mean average of 79.3/100, and a trimmed mean (excluding outliers) of 79.5/100. The standard deviation for this album is 11.7.

Just a nice album; 'Love is the Drug' by far the best song

Love is the Drug, Both Ends Burning and Whirlwind are my favourite tracks.

'Love is the Drug' my favourite Roxy track,'Both Ends Burning' is a great track also,not a bad album but not their best.

Songs aren't always inventive (though certainly sometimes- just look at "She Sells"!) but simply made by Bryan Ferry's engaging "performance". So many great 70s albums- shocked this doesn't make my top 100.

Discounting, avalon, I would say this is the last great Roxy Music album. After this they would slip into that slightly safe and dull white soul sound, something that would have been unthinkable up to now. Anyway, siren, is superb. Love is the drug, both ends burning, and, just another high, are all standouts, but there's no weak tracks here. Excellent.

This album marked a point at which the group moved from a fairly solid prog/art rock foundation to a more pop-oriented sound.

Made great by my fave Roxy track - Both Ends Burning

The album is consistently pleasant, but not much at all stands out.

Your feedback for Siren