Beauty Behind The Madness (studio album) by The Weeknd 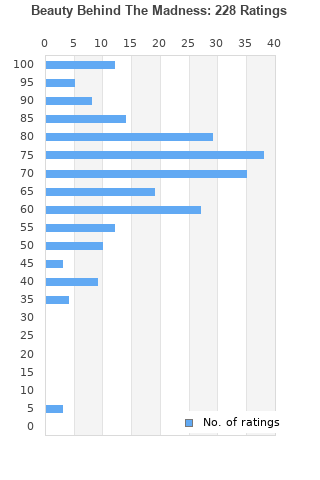 Beauty Behind The Madness is ranked 3rd best out of 11 albums by The Weeknd on BestEverAlbums.com.

The best album by The Weeknd is House Of Balloons which is ranked number 992 in the list of all-time albums with a total rank score of 1,879. 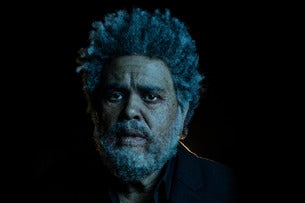 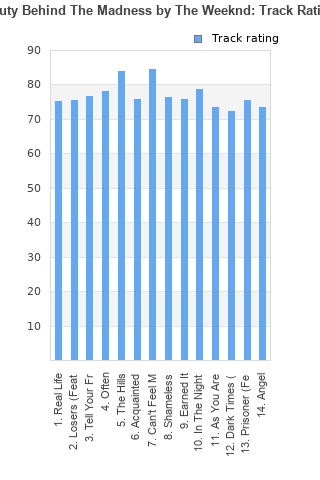 Beauty Behind The Madness rankings

Beauty Behind The Madness collection

Beauty Behind The Madness ratings

Rating metrics: Outliers can be removed when calculating a mean average to dampen the effects of ratings outside the normal distribution. This figure is provided as the trimmed mean. A high standard deviation can be legitimate, but can sometimes indicate 'gaming' is occurring. Consider a simplified example* of an item receiving ratings of 100, 50, & 0. The mean average rating would be 50. However, ratings of 55, 50 & 45 could also result in the same average. The second average might be more trusted because there is more consensus around a particular rating (a lower deviation).
(*In practice, some albums can have several thousand ratings)
This album has a Bayesian average rating of 70.3/100, a mean average of 69.2/100, and a trimmed mean (excluding outliers) of 70.2/100. The standard deviation for this album is 16.6.

Beauty Behind The Madness favourites

Beauty Behind The Madness comments

The Hills and Cant feel my face are the two highlights. Otherwise it's consistant, but not his best. just in front of House of Balloons for me

One unquestionably great song and some fun production here and there, but I was having a hard time liking this persona enough to spend over an hour with it.

He should watch out not to sound like an MJ cover band, but somehow it only becomes apparent how much he sounds like MJ when you pay attention to it. He always manages to add that Weeknd magic to it, that makes it unique.

Great, wacky album. He has a great voice!

this is Abel's transition to pop music, while it's better than the usual radio-friendly songs. Kind of catchy, at the cost of a more generic sound. It's still a downgrade of his previous works. But it doesn't mean it's bad, he is truly one of the best male voices on the industry, and really remains you to MJ.
Is better to listen to The Weeknd 24/7 on the radio, than anything else.

Two very different singles from this record have launched The Weeknd into the American mainstream: the dark and gritty "The Hills" and the funky pop charmer "Can't Feel My Face." The artist has been known for the dark and dreary tunes than can alienate people from becoming fans, but the fun of "Can't Feel My Face" may be the light at the end of that dark tunnel.

Still, those dreary tunes flood this album and keep it from being listenable all the way through. I think more collaborations with talented artists could really lift his music and make it more appealing than his current loner DIY approach.

If he can channel more groove and charm into his music he could very well deliver some more great singles or even a solid album in the next few years. I will definitely be watching for more from this Toronto native.

Something more than average coming out of Mainstream Pop/R&B

Can't Feel My Face is one of the catchiest tunes of the year. The rest of the album is decent but the subject matter of the songs gets repetitive real quick

'Tell Your Friends' is a top ten song of the year, and 'I Can't Feel My Face' is an MJ-esque monster of a pop song. The rest is cool enough, if lacking the mystique that made his early releases so good, but after the terrible Kiss Land this was a rather pleasant surprise. Still bump those two songs mentioned above on an almost daily basis in my girlfriend's car.

Your feedback for Beauty Behind The Madness