House Of Balloons (studio album) by The Weeknd 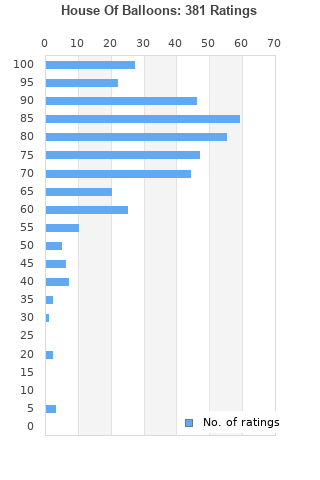 House Of Balloons is ranked as the best album by The Weeknd. 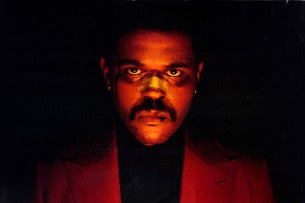 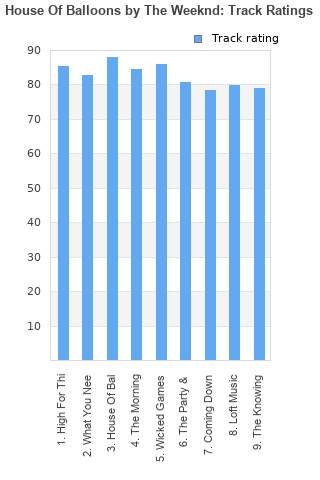 Rating metrics: Outliers can be removed when calculating a mean average to dampen the effects of ratings outside the normal distribution. This figure is provided as the trimmed mean. A high standard deviation can be legitimate, but can sometimes indicate 'gaming' is occurring. Consider a simplified example* of an item receiving ratings of 100, 50, & 0. The mean average rating would be 50. However, ratings of 55, 50 & 45 could also result in the same average. The second average might be more trusted because there is more consensus around a particular rating (a lower deviation).
(*In practice, some albums can have several thousand ratings)
This album is rated in the top 4% of all albums on BestEverAlbums.com. This album has a Bayesian average rating of 77.8/100, a mean average of 76.9/100, and a trimmed mean (excluding outliers) of 78.0/100. The standard deviation for this album is 16.3.

The Weeknd introduces himself with very nice vocals and production.

The secret to this album's unique, woozy sound? A great love for dream pop samples.

the first half of the album is amazing, but the second half is forgettable and boring in my opinion

couple of tracks stand out the rest is just forgettable

After 8 more months of tipsy relationship experiences and a little growing up, I can confirm that this is brilliant.

Way too overrated. Yah whatever its the "NEW ORIGINAL R&B" its just autotune singing over hip hop beats. Plus the guy acts like a complete asshole in just about all of his songs. I don't think this album is as impressive as they all say.

His accessible sound is reminiscent of The Dream and infused with chopped and screwed over-production. It's lyrics are low in self-esteem and intelligence but this album cannot remotely come into frame with small PC speakers. This bass is meant to be felt under the influence of your choice. It's the perfect grinding sex-track but its depth doesn't get much deeper than that. Not much more one can expect from a testosterone infused 20yr old. Here's the truth: the Weeknd isn't changing the music scene but "What You Need" and "Coming Down" are worth listens. If you can handle that, listen to the album's mission statement "High For This" and finally " Loft Music". It's much better than the worst comments suggest and not as game-changing as the sweetest comments suggest.

beautiful voice, a good listen all the way through if I'm not focusing too much on the lyrics.

As The Weeknd becomes more and more popular the more people misunderstand his work. The passionate music critics and listeners have known about The Weeknd for a long time now and we understand just how fresh and talented this group is. Abel Tesfaye and his producers put a creepy dark twist on electronic R&B and they do it very very well. Abels lyrics are dark, dirty, even gross at times. His voice is beautiful but at the same time tinged with despair. I will admit the lyrics can be superficial at times but that is the only negative when it comes to House of Balloons. Remember that this is a debut album! For a debut album House of Balloons is extremely confident. The genre obliterating style along with the old fashioned song craft make this album very unique, exciting, and leave the listener hanging on every phrase. The Weeknd puts you in a dark, depressing, scary vacuum and we listeners are left to experience the raw darkness all alone. The lyrical content is overtly sexual, narcotics focused, and occasionally downright frightening and I as the listener am left enjoying every minute of it. I highly recommend this album. I would never want to live in his lyrics but damn these songs are hard to stop listening to.

Your feedback for House Of Balloons