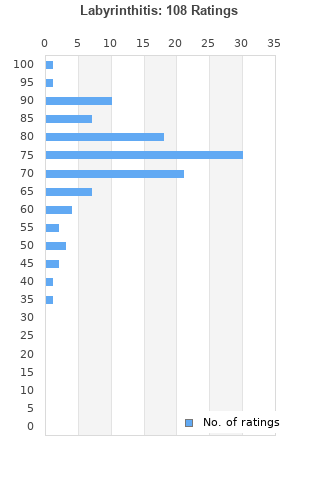 Labyrinthitis is ranked 9th best out of 17 albums by Destroyer on BestEverAlbums.com.

The best album by Destroyer is Kaputt which is ranked number 461 in the list of all-time albums with a total rank score of 4,120. 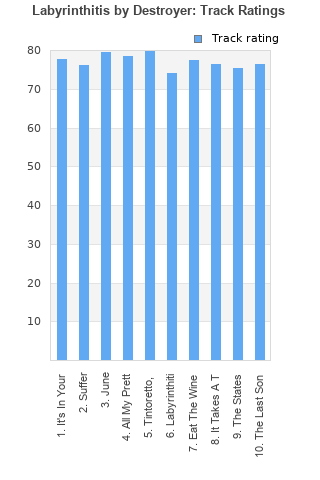 Rating metrics: Outliers can be removed when calculating a mean average to dampen the effects of ratings outside the normal distribution. This figure is provided as the trimmed mean. A high standard deviation can be legitimate, but can sometimes indicate 'gaming' is occurring. Consider a simplified example* of an item receiving ratings of 100, 50, & 0. The mean average rating would be 50. However, ratings of 55, 50 & 45 could also result in the same average. The second average might be more trusted because there is more consensus around a particular rating (a lower deviation).
(*In practice, some albums can have several thousand ratings)
This album is rated in the top 16% of all albums on BestEverAlbums.com. This album has a Bayesian average rating of 75.0/100, a mean average of 74.6/100, and a trimmed mean (excluding outliers) of 75.4/100. The standard deviation for this album is 10.9.

Destroyer is now way too glossy, the guy is just adding effects to everything. The problem is that reverb, analog echo, etc. in Labyrinthitis are just poorly incorporated; it's too easy to hear the specific effect. The sound isn't ethereal, it's synthetic – in other words the effects are poorly textured, too highly mixed, and maybe even added digitally to recordings in post – but it's clear nobody was going for that. It's more the kind of thing you'd expect from people who go for a kind of clinical perfection in their production, such as Jacob Collier. That said, there's fun songs on here, and even the ones that have the aforementioned production issue, as instrumental layers are added, become quite fun actually - June is a good example. Destroyer still has it, he just needs to get back to basics I think, or be a little whacky with song structure again if he's going to keep this lowkey funk thing going.

His best since Poison Season

Pretty sure this is the most I've enjoyed Destroyer. Loved the singles and the album has a great flow. Has like a similarity to early Brian Eno which includes Another Green World and like a hint of Talking Heads so like that Eno/Byrne album or something? I dunno it's super cool and exciting music so yeah.. :-P

Your feedback for Labyrinthitis