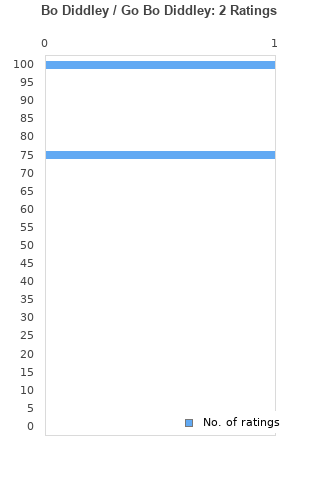 Bo Diddley / Go Bo Diddley is ranked - best out of 19 albums by Bo Diddley on BestEverAlbums.com.

The best album by Bo Diddley is Bo Diddley which is ranked number 1249 in the list of all-time albums with a total rank score of 1,434.

No tracks have been rated on this album yet.
#
Track
Rating/Comments
1.
Bo Diddley
Rating: Not enough dataComments:

0
3.
Bring It To Jerome
Rating: Not enough dataComments:

0
4.
Before You Accuse Me
Rating: Not enough dataComments:

0
11.
Who Do You Love
Rating: Not enough dataComments:

0
13.
Crackin' Up
Rating: Not enough dataComments:

In 1986 MCA/Chess Records re-packaged Bo Diddley's first two albums on one compact disc and released it as (Cat#: CHD-5904). All the top tunes are here within this single disc. Authenticated on discogs.com