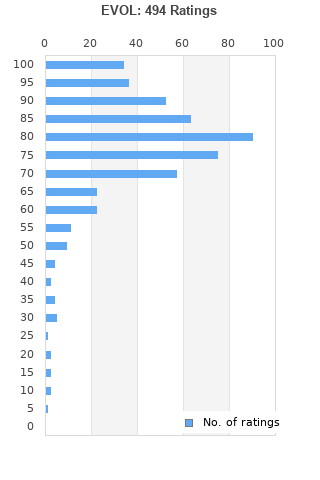 EVOL is ranked 4th best out of 35 albums by Sonic Youth on BestEverAlbums.com.

The best album by Sonic Youth is Daydream Nation which is ranked number 71 in the list of all-time albums with a total rank score of 19,716. 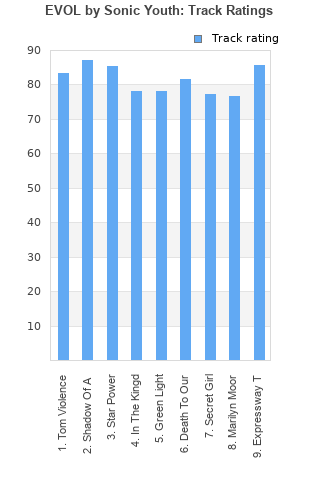 Rating metrics: Outliers can be removed when calculating a mean average to dampen the effects of ratings outside the normal distribution. This figure is provided as the trimmed mean. A high standard deviation can be legitimate, but can sometimes indicate 'gaming' is occurring. Consider a simplified example* of an item receiving ratings of 100, 50, & 0. The mean average rating would be 50. However, ratings of 55, 50 & 45 could also result in the same average. The second average might be more trusted because there is more consensus around a particular rating (a lower deviation).
(*In practice, some albums can have several thousand ratings)
This album is rated in the top 2% of all albums on BestEverAlbums.com. This album has a Bayesian average rating of 79.1/100, a mean average of 77.9/100, and a trimmed mean (excluding outliers) of 79.3/100. The standard deviation for this album is 15.3.

Evol is transitional for them and they started to focus on songcraft. This set them up for what I think is their best album, Sister.

EVOL has its roots in post-punk, leaving me to believe they had not yet fully found their identity. I've yet to hear a Sonic Youth album I didn't love, though, and this is quite fantastic. Noisy as always, but a bit more reserved than some of their other records.

Maybe not as good as their bests, but this is still an amazing record and a great experience.

If I'd bought and heard this around the time I was listening to Slanted and Enchanted, Psychocandy, VU, Joy Division, Ride...as a teenager in '92 then I'd think this was cool as owt and love it as much as the others. Music wasn't meant to be enjoyed through tiny phone speakers though but still sounds pretty cool.

Solid album, nice and dark. Expressway To Yr Skull is the best song on the album.

This has a warmth to it more than any other Sonic Youth album I've listened to.

Dark and atmospheric, my second favorite of Sonic Youth.

Without doubt one of their top 3 albums. It's hard to understate how important this record is to music. For those of you that may disagree: If this record didn't happen, Sister, and Daydream Nation, two of the most important and influential records of the late 80s couldn't have happened. Other than that, the other things that made this record great are as follow: they finally decided to incorporate mainstream song structures into their songs, and they fused that with their noisey punk roots, to make a beautiful and atmospheric album. Also first album to have a Lee vocal (In the Kingdom #19), and first album with Steve Shelley, completing the bands core lineup.

Your feedback for EVOL