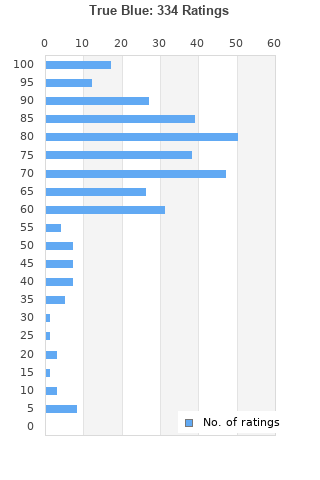 True Blue is ranked 3rd best out of 26 albums by Madonna on BestEverAlbums.com.

The best album by Madonna is Ray Of Light which is ranked number 642 in the list of all-time albums with a total rank score of 2,892. 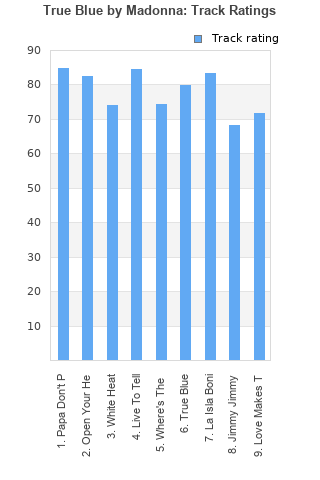 Rating metrics: Outliers can be removed when calculating a mean average to dampen the effects of ratings outside the normal distribution. This figure is provided as the trimmed mean. A high standard deviation can be legitimate, but can sometimes indicate 'gaming' is occurring. Consider a simplified example* of an item receiving ratings of 100, 50, & 0. The mean average rating would be 50. However, ratings of 55, 50 & 45 could also result in the same average. The second average might be more trusted because there is more consensus around a particular rating (a lower deviation).
(*In practice, some albums can have several thousand ratings)
This album has a Bayesian average rating of 73.4/100, a mean average of 71.1/100, and a trimmed mean (excluding outliers) of 73.4/100. The standard deviation for this album is 19.8.

Fading as the years pass

After the album "True Blue", Madonna truly became female superstar of the 1980's with male superstars Micheal Jackson and Prince. My favourite tracks are "Live to Tell" and " True Blue.

A good pop album. Papa Don't Preach & Live To Tell are by far the best tracks. Tracks 5-9 which made up Side 2 on vinyl are not great apart from La Isla Bonita

as i mentioned in a forum post, one of my most memorable musical moments happened while i was on a summer study program in japan in 1986. our class hiked up to the top of Mt. Fuji, and along the way we were passed by two guys who were carrying a boombox that was blasting "Papa Don't Preach". it really was a pretty surreal moment :-)

I guess the question is, how do you follow-up "Like A Virgin", Madonna's huge pop success of 1984? She basically sticks to the pop formula that worked before, straying further from the dance-pop that earmarked her debut. Like Jacko did with Bad, following the former album's template worked pretty well garnering True Blue 5 pop hits including the then-controversial "papa don't preach".

Albums like Ray Of Light and Like A Prayer are artistically superior, but just for no frills pure pop, this is Madonna at the top of her game

Another Greatest hits on a studio album almost, her best album in my opinion Live To Tell,Papa Don't Preach,La Isla Bonita,Open Your Heart four of her best tunes

Your feedback for True Blue