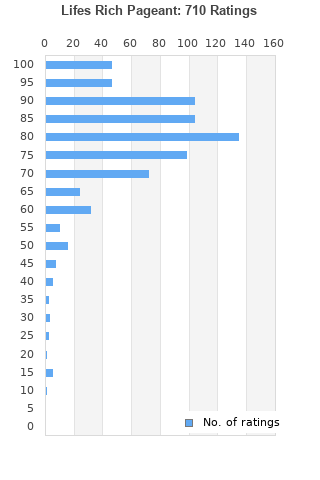 Lifes Rich Pageant is ranked 6th best out of 35 albums by R.E.M. on BestEverAlbums.com.

The best album by R.E.M. is Automatic For The People which is ranked number 53 in the list of all-time albums with a total rank score of 21,845. 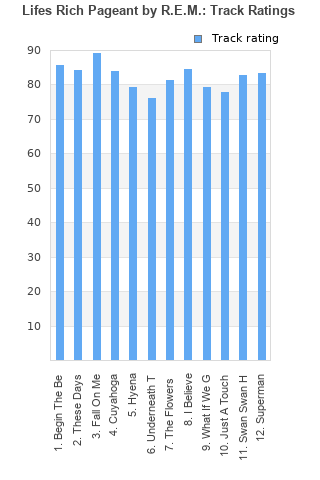 Rating metrics: Outliers can be removed when calculating a mean average to dampen the effects of ratings outside the normal distribution. This figure is provided as the trimmed mean. A high standard deviation can be legitimate, but can sometimes indicate 'gaming' is occurring. Consider a simplified example* of an item receiving ratings of 100, 50, & 0. The mean average rating would be 50. However, ratings of 55, 50 & 45 could also result in the same average. The second average might be more trusted because there is more consensus around a particular rating (a lower deviation).
(*In practice, some albums can have several thousand ratings)
This album is rated in the top 2% of all albums on BestEverAlbums.com. This album has a Bayesian average rating of 79.8/100, a mean average of 78.8/100, and a trimmed mean (excluding outliers) of 79.9/100. The standard deviation for this album is 14.5.

I Like this better than almost any other REM album.

This is where they really found their sound. Undeniably R.E.M.

Outstanding album from one of the decade's best bands. Consistent excellence all the way through.

It picks up after the first three tracks, but nothing earth-shattering for me.

Never understood why this album got virtually no attention during its time, even on college radio. The video for "Fall on Me" found its way onto MTV, but other than that, there was nothing.
A pity, because that song was only one of a collection of the greatest music R.E.M. ever recorded. Rare is the time I play this album today, only because I did so nonstop from beginning to end back in the late eighties.

My favourite album by my all time favourite band says it all , R.E.M' masterpiece.

'Lifes Rich Pageant' is album number 2 in the R.E.M holy trinity of incredible releases with the band at their creative peak ( 'Fables' 1985 , followed by 'Life' 1986 , followed by 'Document'1987 ). IMO only The Beatles have released 3 consecutive albums better that these 3 from R.E.M. 'Lifes Rich Pagent' contains no less than 6 amazingly perfect tracks in 'Begin The Begin'/'These Days'/'Fall On Me'/'The Flowers Of Guatemala '/'Swan Swan H' and even the cover 'Superman'. The track ' What If We Give It Away' is easily the only weak point and stops me giving this album a perfect 100/100.

I was just talking with my dad the other day about what a great album Lifes Rich Pageant is. We're of very different generations musically, and this is one of those rare points of total agreement. The song he singled out for particular praise was "The Flowers of Guatemala," and I couldn't agree more; it might be the single greatest song R.E.M. ever recorded. It's a haunting political song about the horrific refugee crisis in Guatemala during the early eighties, largely a product of the Reagan administration's meddling in central American political and military affairs. The song itself is an incredibly warm and compassionate depiction of the refugees affected by this situation, with its evocative metaphor of deadly amanita mushrooms as "flowers." Pete Buck's searing guitar solo in this song gives me goosebumps even now, even after listening to this album for the thousandth time. Just a brilliant piece of work.

Your feedback for Lifes Rich Pageant