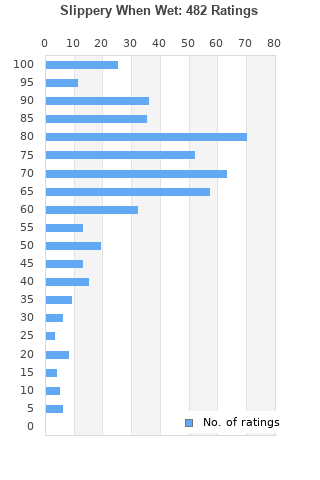 Slippery When Wet is ranked as the best album by Bon Jovi.

Bob Jovi & Just What I Needed: A Tribute To The Cars
VooDoo at Harrah's Kansas City, Kansas City, United States. 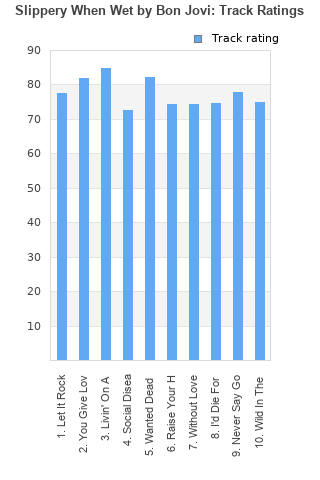 Rating metrics: Outliers can be removed when calculating a mean average to dampen the effects of ratings outside the normal distribution. This figure is provided as the trimmed mean. A high standard deviation can be legitimate, but can sometimes indicate 'gaming' is occurring. Consider a simplified example* of an item receiving ratings of 100, 50, & 0. The mean average rating would be 50. However, ratings of 55, 50 & 45 could also result in the same average. The second average might be more trusted because there is more consensus around a particular rating (a lower deviation).
(*In practice, some albums can have several thousand ratings)
This album has a Bayesian average rating of 69.5/100, a mean average of 68.4/100, and a trimmed mean (excluding outliers) of 69.4/100. The standard deviation for this album is 20.4.

One of the pop, GREAT pop&hard rock albums with big songs and melodies.

It’s an 80’s Arena Rock Classic with excellent loud production and mixing and takes you back to a time when rock bands still knew how to have fun…….

Surprised I liked this as much as I did. I was sure these songs had worn out their welcome in my ears, but apparently not, and the hair metal sound was a welcome change from the other stereotypical sounds of the 80s

Hair metal or pop metal? Some great tracks on this album, it's the 'party' album that Kiss's Destroyer should have been.

I actually think These Days is Bon Jovi's best and most consistent album, but Slippery is a good record. Obvious standouts are the singles, but "Never Say Goodbye", "Riase Your Hands" and "Wild in the Streets" are good songs. A perfect hits-plus-filler record.

Biggest problem is that it is too aggressive. Some real gems among these tracks, so +5 points than it would be otherwise.

This album introduced me to hard rock (or hair metal as you might call that) many years ago, so maybe i can be biased but 67/100 is not fair, this is kind of a masterpiece in this genre, from the beginning wonderful organ of Let it rock, to the wild rythm of Wild in the streets, through that which in my opinion is a wonderful ballad,Wanted dead or alive.

Your feedback for Slippery When Wet