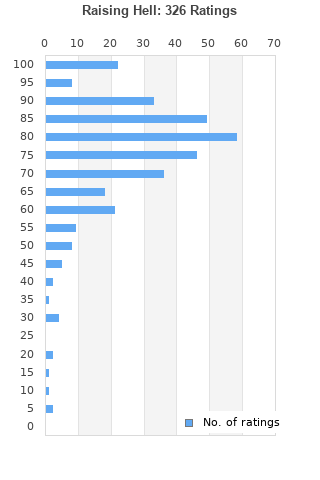 Raising Hell is ranked as the best album by Run-D.M.C.. 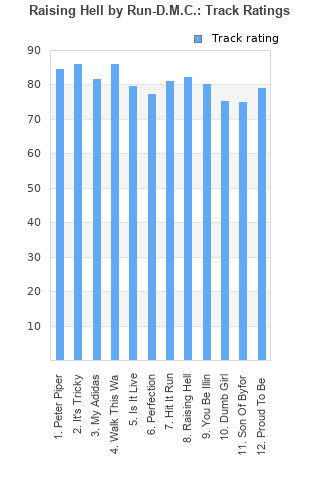 Rating metrics: Outliers can be removed when calculating a mean average to dampen the effects of ratings outside the normal distribution. This figure is provided as the trimmed mean. A high standard deviation can be legitimate, but can sometimes indicate 'gaming' is occurring. Consider a simplified example* of an item receiving ratings of 100, 50, & 0. The mean average rating would be 50. However, ratings of 55, 50 & 45 could also result in the same average. The second average might be more trusted because there is more consensus around a particular rating (a lower deviation).
(*In practice, some albums can have several thousand ratings)
This album is rated in the top 6% of all albums on BestEverAlbums.com. This album has a Bayesian average rating of 76.4/100, a mean average of 75.4/100, and a trimmed mean (excluding outliers) of 76.5/100. The standard deviation for this album is 16.3.

A stack of genuine classics. But also Dumb Girl.

This album and Licensed To Ill by the Beastie Boys bring back some many memories of High School. Both records are a perfect and play together well as a mix.

Favorite Tracks:You Be Illin', Dumb Girl, Son Of Byford, Proud To Be Black

You know it's a good album when it's Chuck D's favourite album.
Favourite songs: Peter Piper, My Adidas

Interesting how this group managed to make a name for themselves as well as reviving Aerosmith's career. Great tracks like Proud to be Black, It's Tricky, Raising Hell, Hit It Run, and of course Walk This Way. This undoubtly an essential album from an essential group to Hip-Hop

Part of the soundtrack to the summer of '86. This is a definite step up from The King Of Rock, with punchier songs that know their limits. The rock influences are cut back and more hip-hop flavors are introduced. I'm surprised to see that "Is It Live", with its drum corps-like percussion, is the lowest rated song. It's definitely my favorite.

Aerosmith have a lot to thank run dmc for. They got a 2nd career on the back of this.

The rap album that started it all. Prior to this one, rap was more a fringe element on the music scene. These guys made it cool.

Launched hip-hop into the mainstream, and despite "My Addidas", it's not a colossal sell-out. Quality early rap.

Run D.M.C. was probably the first rap group (or rappers, for that matter) that consistently put out dope raps, popularizing the budding music genre. This album, their best, was probably THE album that introduced white american masses to the heretofore black genre (save the beasties, of course) via the rap/rock jam "walk this way" (which also put aerosmith back on the radio). Other tracks to sample are "my adidas" and "it's tricky".

Your feedback for Raising Hell