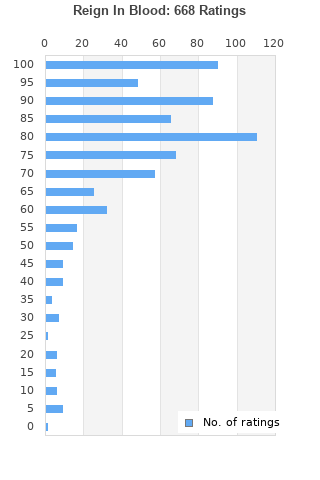 Reign In Blood is ranked as the best album by Slayer. 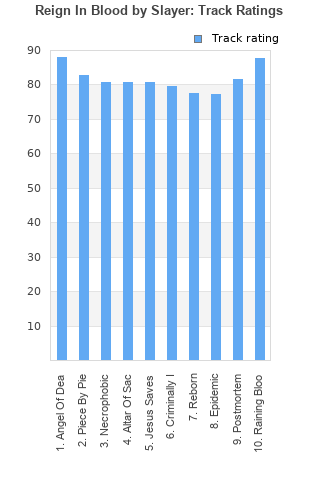 Rating metrics: Outliers can be removed when calculating a mean average to dampen the effects of ratings outside the normal distribution. This figure is provided as the trimmed mean. A high standard deviation can be legitimate, but can sometimes indicate 'gaming' is occurring. Consider a simplified example* of an item receiving ratings of 100, 50, & 0. The mean average rating would be 50. However, ratings of 55, 50 & 45 could also result in the same average. The second average might be more trusted because there is more consensus around a particular rating (a lower deviation).
(*In practice, some albums can have several thousand ratings)
This album is rated in the top 2% of all albums on BestEverAlbums.com. This album has a Bayesian average rating of 79.1/100, a mean average of 77.0/100, and a trimmed mean (excluding outliers) of 79.2/100. The standard deviation for this album is 20.4.

I've been on an extreme metal kick and on the most recent spin of this, after over 18 years of listening to it, it finally FULLY hit me and hit me so hard. Not just the obvious classics on it but the "lesser" tracks as well. Death metal and even chaotic black metal are ear candy compared to this - its type of solos are more common in noise rock and I've grown to greatly appreciate noise rock. I remember thinking that the solos were kind of grating. I never fully appreciated someone just saying "fuck you" with their guitar, with that nails-on-chalkboard sound, b4 falling completely in love with Pixies, Big Black, and Velvet Underground. When I say that death is ear candy in comparison, it's not hyperbole - low tuned instruments are just easy to listen to, the speed is irrelevant. Reign in Blood pummels you and rarely lets up - never for long. I actually remember getting literal, serious headaches from listening to the full album.

I listened to this on the heels of tech death classics - Unknown Presence and Human to be specific, and this one actually hits harder. A LOT harder.

Released in 1986?! That's just insane. There is absolutely NO substitute for this. I have over 100 extreme metal records on vinyl and this scratches the itch like no other. It's more than the usual classic of this genre - technically impressive with great guitar and drumwork - this is also full of the same level of energy and attitude as the best punk or hardcore records (like Fun House or Damaged). If I want what this delivers, this is the only album in its genre. I could always listen to Songs About Fucking, sure, but no metal record will do it.

Slayer are unique. They have a sound unlike that of any other band. They are the definitive kings of thrash metal. 'Angel of Death' being in the top ten greatest metal songs of all time. This is the album which defined them. Very good but personally I prefer 'South of Heaven'.

This is an essential album for its genre (by the way, this, Peace Sells and Master of Puppets all came out in 1986, what a year that was!). My complaint would be that it is way too fast and most of the tracks don't stick with you.

Bought Reign the day it came out after class in 10th grade. There was lots of talk about this one amongst us metal kids. The thing is though now, Hell Awaits seems to have aged better and it has to do with old style production Metoyer and Slagel did with the album. Reign In Blood kind of has a nostalgia value to it, but we really played the shit out of this one 34 yrs ago every single day and we had the cassettes of this one where the whole recording was on both sides of the tape. Good memories.

This entire record sounds like nothing I've ever heard (and probably will ever hear). Almost every track is at breakneck speed, and sounds like it emerged straight from the pits of hell. This means that it works for very particular moods, but isn't something to really sit down and listen to.

For its sound, it enjoyable, but there are only two songs I really care for, and those are the two most obvious choices of Angel of Death and Raining Blood. They're characterized by being actual good songs over the good sound.

Now, look - I'm not saying the other songs are bad, but this is far from what I listen to everyday, so I'll stick with the highlights.

Overall, this record isn't for everyone, but if you want something loud, fast, and brutal, then this is for you.

Angel Of Death and Raining Blood make this album awesome. In between, the drums make things interesting enough that the songs are good.

Your feedback for Reign In Blood