Peace Sells... But Who's Buying? (studio album) by Megadeth 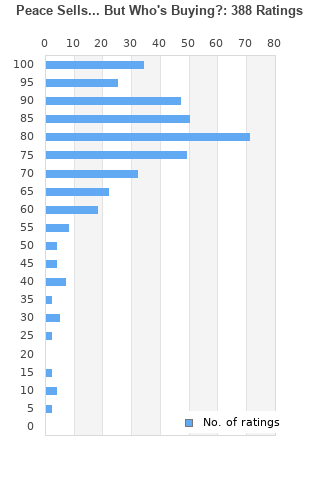 Peace Sells... But Who's Buying? is ranked 2nd best out of 24 albums by Megadeth on BestEverAlbums.com.

The best album by Megadeth is Rust In Peace which is ranked number 409 in the list of all-time albums with a total rank score of 4,666.

Listen to Peace Sells... But Who's Buying? on YouTube 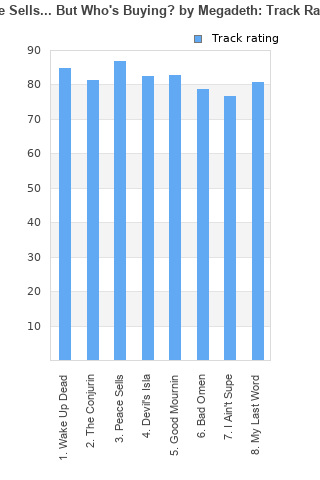 Peace Sells... But Who's Buying? rankings

Peace Sells... But Who's Buying? collection

Peace Sells... But Who's Buying? ratings

Rating metrics: Outliers can be removed when calculating a mean average to dampen the effects of ratings outside the normal distribution. This figure is provided as the trimmed mean. A high standard deviation can be legitimate, but can sometimes indicate 'gaming' is occurring. Consider a simplified example* of an item receiving ratings of 100, 50, & 0. The mean average rating would be 50. However, ratings of 55, 50 & 45 could also result in the same average. The second average might be more trusted because there is more consensus around a particular rating (a lower deviation).
(*In practice, some albums can have several thousand ratings)
This album is rated in the top 3% of all albums on BestEverAlbums.com. This album has a Bayesian average rating of 78.4/100, a mean average of 77.2/100, and a trimmed mean (excluding outliers) of 78.5/100. The standard deviation for this album is 17.8.

Peace Sells... But Who's Buying? favourites

Peace Sells... But Who's Buying? comments

Thrash-metal you can dance to: the album. Its interesting comparing this album with Master of Puppets, the musiancianship here seems much more fluid while Master of Puppets sounds rigid but it also lacks the epic feel of Metallica or Sepultura.

Far from my tastes, but it is a genre defining album and my favorite by them. Overall, 80/100.

It was purely original metal music when it first came out (still is). It took many listens back in the fall of '86. to fully accept it for what it was. Intrigueing metal style and superior songcraft. Mustaine's vision could only be realized with his own band. Glad he wasn't given a warning or 2nd chance by hetfield and lars.

Great album with some of the best tracks Megadeth produced. Few which are on the also ran category though being less memorable. Overall finding momentum which led to the next album (Rust in Peace') being a trash classic

Even if he doesn't seem to realize it to this day, being thrown out of Metallica was undoubtedly the best thing that could have happened to Mustaine, not least because, well, it eventually paved the way for this - a distinctive, punkish, scorching and urgent beast of an album further elevated by prog-minded sequencing, an awesome crank-it-up-right-through-your-eardrums mixing and mastering job (which is also remarkably "wet" for a quality 80's thrash metal record) and some really memorable visual art direction. The A side is particularly impressive and shouldn't be missed by anyone remotely interested in the (sub)genre.

A fun album to listen to, but it doesn't really stick with you and can be a bit too thrash-y at times. The title track and Wake up Dead at least have some good melodies with a great beat to them, but most of the other songs, while fun for the moment, just don't offer much in terms of melody. I Ain't Superstitious and the Conjuring are two other tracks worth mentioning, as they are pretty good, but the rest is just early thrash (meaning that it's relatively tolerable).

Guitar work on this is second to none!

A more consistent album than Rust in Piece, but lacking the huge mountain peaks that that album has, though this album has some fantastic songs. A very important album for thrash metal and heavy metal music in general

Your feedback for Peace Sells... But Who's Buying?