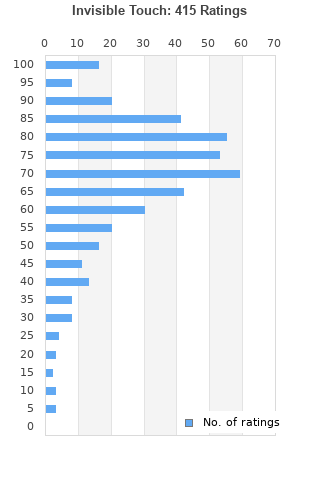 Invisible Touch is ranked 8th best out of 33 albums by Genesis on BestEverAlbums.com.

The best album by Genesis is Selling England By The Pound which is ranked number 124 in the list of all-time albums with a total rank score of 13,176. 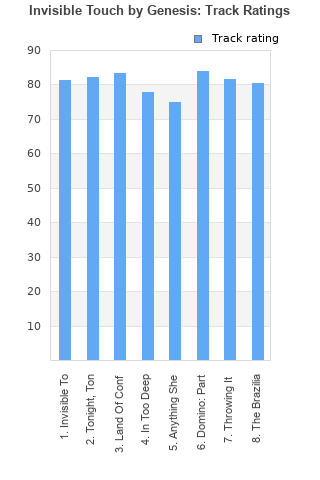 Rating metrics: Outliers can be removed when calculating a mean average to dampen the effects of ratings outside the normal distribution. This figure is provided as the trimmed mean. A high standard deviation can be legitimate, but can sometimes indicate 'gaming' is occurring. Consider a simplified example* of an item receiving ratings of 100, 50, & 0. The mean average rating would be 50. However, ratings of 55, 50 & 45 could also result in the same average. The second average might be more trusted because there is more consensus around a particular rating (a lower deviation).
(*In practice, some albums can have several thousand ratings)
This album has a Bayesian average rating of 69.4/100, a mean average of 68.4/100, and a trimmed mean (excluding outliers) of 69.3/100. The standard deviation for this album is 18.3.

Not my favorite Genesis album because it is too much pop and not enough prog, but it is still a good album that deserves to be better appreciated! Songs like Domino and Tonight, Tonight, Tonight are still inventive pieces of music, just different than before!

Powerpoprock of the 80s is always good for your mind and body.

Unfairly underrated by Genesis fans due to Phil Collins pop sensibilities bleeding in at this point.. to me these songs are full of soul and artistry. Solid album.

Probably stronger than Shapes. The standouts are Tonight and Domino. I like the title track, The Brazilian is quirky and Throwing It All Away is a great pop song. Overall pretty decent.

Nice laid back album of pop as I would describe it. Most tracks enjoyable and an easy listen.

A much-maligned album by hardcore Genesis fans that gets much more hate than it deserves. Yes, it's got some really poppy moments, but they're pretty inoffensive and often quite catchy. Some are even rather excellent (Throwing It All Away). There's also a nice political rocker in Land of Confusion and surprising but much-welcomed prog-pop epic in Domino. Dig deeper than the pop here and you'll find some solid stuff. Aside from Genesis' debut, you could make the argument that this is Genesis' worst album up to this point in time, and you'd have an argument, but I wouldn't go as far as calling it a bad album when there's so much treasure hidden underneath the radio favorites. Not a bad album in the slightest, just uneven.

Your feedback for Invisible Touch