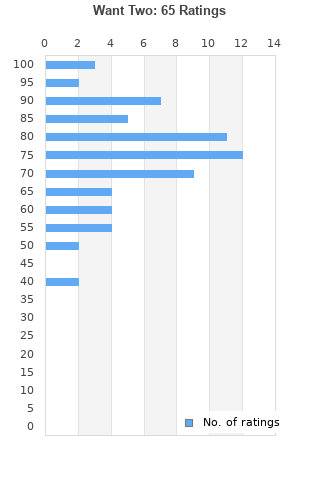 250 CD's Pick which ones you like - Low shipping for multiple items - Set B
Condition: Very Good
Time left: 9h 44m 12s
Ships to: Worldwide
$3.00
Go to store
Product prices and availability are accurate as of the date indicated and are subject to change. Any price and availability information displayed on the linked website at the time of purchase will apply to the purchase of this product.  See full search results on eBay

Want Two is ranked 3rd best out of 13 albums by Rufus Wainwright on BestEverAlbums.com.

The best album by Rufus Wainwright is Want One which is ranked number 2430 in the list of all-time albums with a total rank score of 652. 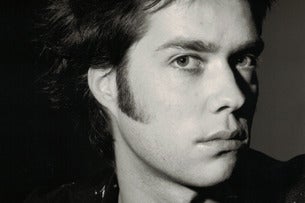 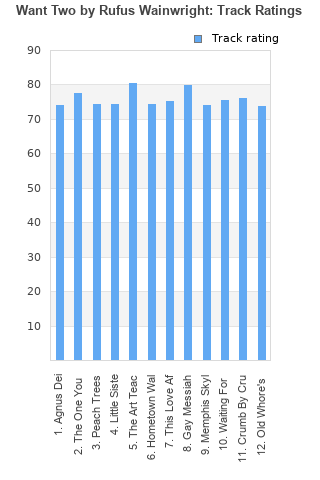 Rating metrics: Outliers can be removed when calculating a mean average to dampen the effects of ratings outside the normal distribution. This figure is provided as the trimmed mean. A high standard deviation can be legitimate, but can sometimes indicate 'gaming' is occurring. Consider a simplified example* of an item receiving ratings of 100, 50, & 0. The mean average rating would be 50. However, ratings of 55, 50 & 45 could also result in the same average. The second average might be more trusted because there is more consensus around a particular rating (a lower deviation).
(*In practice, some albums can have several thousand ratings)
This album is rated in the top 17% of all albums on BestEverAlbums.com. This album has a Bayesian average rating of 75.1/100, a mean average of 75.4/100, and a trimmed mean (excluding outliers) of 75.4/100. The standard deviation for this album is 14.0.

With a few exceptions, I didn't find this particularly appealing.

The companion album to, want one, is a darker and more moody record. Kicking off with, Agnus Dei, an atmospheric track based on a Turkish prayer or something. The one you love, is probably the most conventional number here, while, peach trees, has that kind of sweet brooding that Wainwright does so well. Gay messiah, is a standout, as is, waiting for a dream, and the Jeff Buckley tribute, Memphis skyline. The album ends with, old whore's diet, a duet with Anthony Hegarty. A superb record, the darkness to, want one's, light, it really should have been a double CD,(in fact, it was released as a limited edition 2CD set called, want), it would have been even more of a masterpiece than it is now.

Your feedback for Want Two