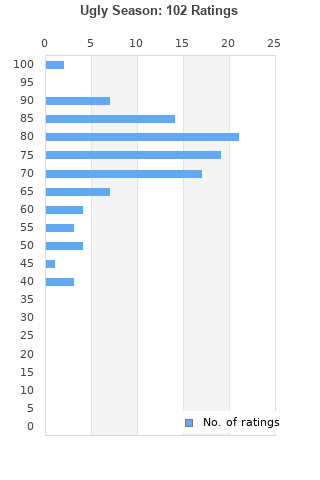 Ugly Season is ranked 6th best out of 7 albums by Perfume Genius on BestEverAlbums.com.

The best album by Perfume Genius is No Shape which is ranked number 1123 in the list of all-time albums with a total rank score of 1,616. 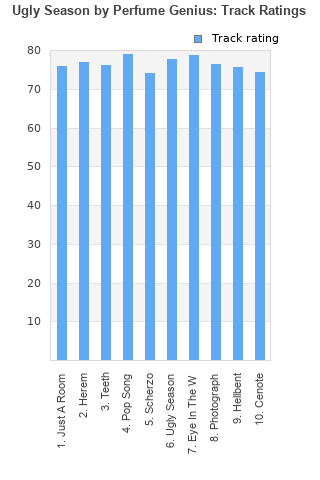 Rating metrics: Outliers can be removed when calculating a mean average to dampen the effects of ratings outside the normal distribution. This figure is provided as the trimmed mean. A high standard deviation can be legitimate, but can sometimes indicate 'gaming' is occurring. Consider a simplified example* of an item receiving ratings of 100, 50, & 0. The mean average rating would be 50. However, ratings of 55, 50 & 45 could also result in the same average. The second average might be more trusted because there is more consensus around a particular rating (a lower deviation).
(*In practice, some albums can have several thousand ratings)
This album is rated in the top 23% of all albums on BestEverAlbums.com. This album has a Bayesian average rating of 74.2/100, a mean average of 74.4/100, and a trimmed mean (excluding outliers) of 74.4/100. The standard deviation for this album is 11.6.

The first thing to understand about this album is it really isn’t a “Perfume Genius album” as we we’ve come to know and love in the frame of fully accessible shimmering pop treats and more of a Mike Hadreas solo album. Secondly ‘Ugly Season’ is the soundtrack to a dance / performance piece Hadreas directed dating back to 2019 which performed on stages and can be seen on YouTube [look up “Pygmalion’s Ugly Season - A Film”] and is a highly artistic dance sequence where the music takes a back seat to the visuals and choreography

So if your expecting ‘Set My Heart On Fire Part 2” it ain’t here, instead wait for the next P.G album to come out whenever that may be

Love Perfume Genius and his last 3 were all in my top 10 the year they came out but this one was sadly underwhelming. I definitely like it and appreciate what he was doing but the flow was all over the place. Some beautifully experimental work but nothing super grabbed me as much as his last 3 albums which were all packed full of songs that slapped, ballads that made you feel things and were just more exciting altogether. Plus the flow of those 3 were fantastic. Back N 2 It is quite great too. Hoping he comes back with a banger album on his next go because he's easily one of my favorite modern musicians.

Perfume Genius embraces ugly musical qualities beautifully. Quietness and dissonant notes are weaved together into pleasant arrangements. The tracks are surprising. The structure will unfold in unexpected ways. For example, “Eye In The Wall” starts as a clattering rhythmic cruise and finishes as a stretched organ reflection. The greatest weakness of the album is the vocal mix. Even with the overall quietness, the vocals are near incomprehensible. It removes a lot of the emotional power of the lyrics. Even with the flaws, “Ugly Season” is a successful experiment.

I found 'Ugly Season' a little harder to get into initially than Perfume Genius's previous outings but in the end it's been just as rewarding a listen as the rest of his albums and I love the experimental direction he's going in.

such a great album, for my is the best album of this year.

I need to preface this by saying that I saw Perfume Genius live in Melbourne a week out from the release of this album in what was one of (probably actually straight up) the worst international live act performance I've ever witnessed. Never have I been so compelled to complain to a venue because a show was mixed in such an appalling way that it was just unlistenable (PG played the same venue for No Shape tour and were good, the venue is always very professionally sound engineered otherwise). Basically, all the instrumental backing was mixed so high that the PA was distorting, and the vocal mic (not all vocals mind you, backing was loud af) on Hadreas was reverbed to shit and unbearably quiet. I got some vindication when you couldn't even head what Mike was saying as he did stage banter and when the show ended and a guy in front of me got up and said to his partner "did they even do a sound check?" Basically, I'm not in the highest spirits about new PG music rn and so this review might change with time once I get over it.

Ugly Season is good, albeit its best songs are singles from the last decade, and those songs which are new don't have either much coherence or continuity. E.g. Pop Song and Scherzo are both good songs, but don't transition nicely (or interestingly) from one to the other at all. It feels like a thrown together project hastily put together off the back of Hadreas going big.

A disappointing step back from his last album.

Your feedback for Ugly Season