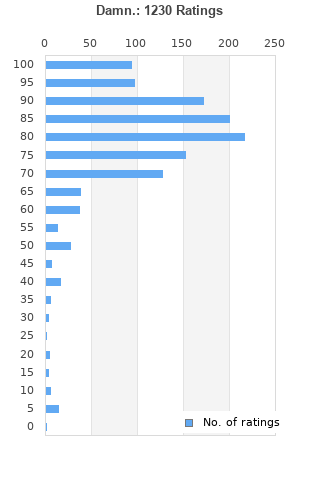 Damn. is ranked 3rd best out of 9 albums by Kendrick Lamar on BestEverAlbums.com.

The best album by Kendrick Lamar is To Pimp A Butterfly which is ranked number 20 in the list of all-time albums with a total rank score of 40,554. 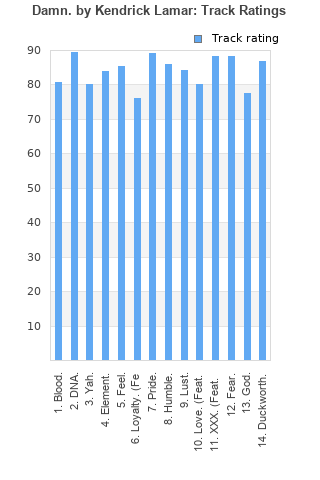 Rating metrics: Outliers can be removed when calculating a mean average to dampen the effects of ratings outside the normal distribution. This figure is provided as the trimmed mean. A high standard deviation can be legitimate, but can sometimes indicate 'gaming' is occurring. Consider a simplified example* of an item receiving ratings of 100, 50, & 0. The mean average rating would be 50. However, ratings of 55, 50 & 45 could also result in the same average. The second average might be more trusted because there is more consensus around a particular rating (a lower deviation).
(*In practice, some albums can have several thousand ratings)
This album is rated in the top 2% of all albums on BestEverAlbums.com. This album has a Bayesian average rating of 80.2/100, a mean average of 78.7/100, and a trimmed mean (excluding outliers) of 80.3/100. The standard deviation for this album is 16.7.

I mean it’s pretty obvious he was vying for commercial success here but it’s still so damn good.

This is Kendrick's Let's Dance. It marks the first time he started chasing trends instead of setting them. But like David Bowie, Kendrick Lamar knows how to write a great album.

I’ll be one of the rare comments that calls this record better than Butterfly, which felt too ambitious…to the point of being cluttered and unfocused. The storytelling on this album (Duckworth is a masterpiece) and the backwards album concept are both brilliant.

NEW KUNG FU KENNY.
AIN'T NOBODY PRAYIN' FOR ME.

Upon first listen, this was super disappointing considering everything that came before it. We'll see if it grows on me more. The song "FEAR." was the only song that I truly adored from this album, but there are other good songs.

No, it isn't as good as GKMC or TPAB, but it's still great. And you know, it has a couple of really great tunes on it. It didn't deserve to win the Pulitzer Prize or whatever, but it doesn't deserve some of the criticism it gets.

Another elite album from Kendrick, despite many people being disappointed in it after his previous two albums which are also legendary, this album is very creative and has deep lyrical themes as much as any other album in the genre. It is in my opinion on of the highest points of hip hop in the past two decades and will be remembered fondly in the future.

I like the pivot toward more personal lyricism, but I miss the musicality of the previous record.

Kendrick at his most introspective and deeply personal. As can be seen from the track titles, he addresses various topics throughout. Hence, this record is his least thematic and cohesive, and yet it holds well together because of the deeply emotional and introspective approach that Lamar takes. In a sense, this is the logical sequel to TPAB where in that one he looked mostly outward (obviously reflecting on how he fits within it all), in order to provide social critique, in DAMN Kendrick retreats into his own mind. All of this, in addition to the extremely pop influences and music (and the horribly annoying NEW KUNG FU KENNY callouts throughout the whole record) make this unsurprisingly the least compelling full-length record from Kendrick (at least for his fans, because his mother thinks it is actually his best). Still, overall it is worth a listen.

Your feedback for Damn.