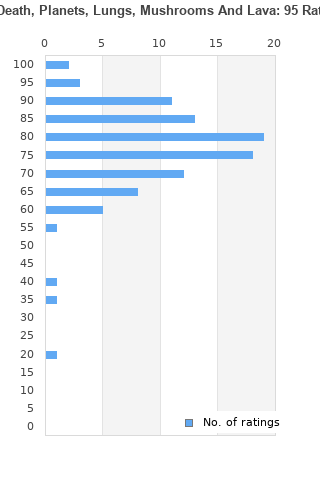 Ice, Death, Planets, Lungs, Mushrooms And Lava is ranked 12th best out of 30 albums by King Gizzard & The Lizard Wizard on BestEverAlbums.com. 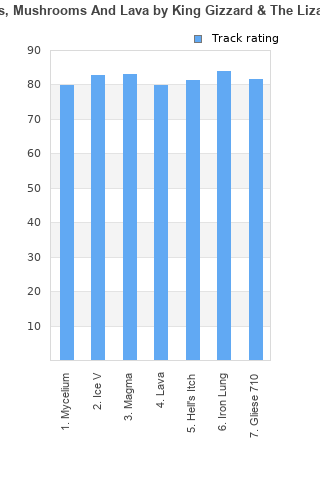 Rating metrics: Outliers can be removed when calculating a mean average to dampen the effects of ratings outside the normal distribution. This figure is provided as the trimmed mean. A high standard deviation can be legitimate, but can sometimes indicate 'gaming' is occurring. Consider a simplified example* of an item receiving ratings of 100, 50, & 0. The mean average rating would be 50. However, ratings of 55, 50 & 45 could also result in the same average. The second average might be more trusted because there is more consensus around a particular rating (a lower deviation).
(*In practice, some albums can have several thousand ratings)
This album is rated in the top 4% of all albums on BestEverAlbums.com. This album has a Bayesian average rating of 77.4/100, a mean average of 76.7/100, and a trimmed mean (excluding outliers) of 78.0/100. The standard deviation for this album is 13.3.

I think an odd side-effect of King Gizz' prolific release schedule is that new albums are just utterly unexciting and – to even a hobbyist music critic – a chore to have to go through. One knows that the music will be at the very least worth listening to at an objective critical level, but at the level of emotional investment (and I think this applies to the band's work in general, not just to "Gizztober" torrential releases) there's nothing to extrude from their music. King Gizzard are arguably Australia's most popular band and they have a sincere following who clearly get excited by new releases. However, I think that following is more derived from their antics and their brand than their music, or at least their music of late. Ice, Death, Planets, Lungs, Mushrooms and Lava is psych rock/prog/jazz-rock harkening back to the early 70s, but with just a hint of quintessential Gizz silliness. It's good, I can't argue against it, but I also don't care that much anymore. Iron Lung is fun.

This band is so fun and it constantly surprises me just how much music they're able to put out that always seems to be pretty consistent and yet usually quite different to what they've done before. 'Ice, Death, Planets, Lungs, Mushrooms And Lava' takes that consistency and difference to the next level, standing as perhaps one of their best and freshest sounding records to date. No word of a lie, I couldn't keep still throughout the just over one hour of African influenced jazz/ psych rock jams, with a big ol' shit-eating grin spread across my face :D

Another great album from king...

I must admit I got a bit fed up with this band and their many many albums per year and the fact that their sound is so jammed up with ... sound. So I nearly gave this one a miss and what a loss this would have been. This is not a jammed up album, it's a jam album and what a jam album it is. It's a long time ago I took so much pure pleasure in just listening to a record. The individual tracks are very long but each one is very different and has an irresistible groove, some with African rhythms, some very guitar based but all are incredibly well done. References go from Santana to The Allman's to Phish but they are mostly themselves. One of the albums of the year.

Wasn't so sure with the first half, but as this album goes on it just keeps on getting better. It's amazing how these guys just keep on pouring out excellent music.

Are you kidding me, KGLW? 11 years and 20 albums later, these guys may be hitting yet another peak with IDPLMAL.

This self-described "jammy" album features tongue-in-cheek lyrics that offer a smirk and a wink towards contemporary jam bands (the same way Infest the Rat's Nest did, but for heavy metal), acid-jazz inspired rhythms, and a more focused approach than Omnium Gatherum. Truly one of the band's most consistent efforts in years, and an absolute joy to listen to. Just a feel-good record at a time we can all use one.

Your feedback for Ice, Death, Planets, Lungs, Mushrooms And Lava