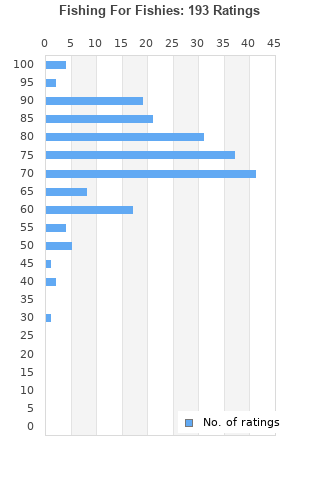 Fishing For Fishies is ranked 5th best out of 27 albums by King Gizzard & The Lizard Wizard on BestEverAlbums.com.

The best album by King Gizzard & The Lizard Wizard is Nonagon Infinity which is ranked number 684 in the list of all-time albums with a total rank score of 2,738.

Tickets from Ticketmaster Get tickets
May
26
Thu
20:00 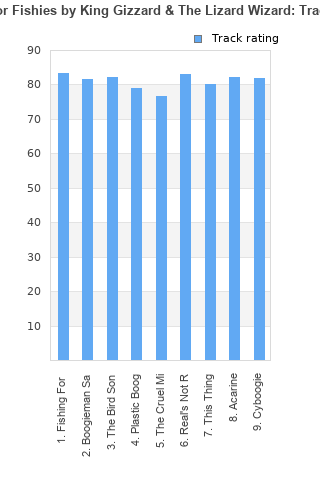 Rating metrics: Outliers can be removed when calculating a mean average to dampen the effects of ratings outside the normal distribution. This figure is provided as the trimmed mean. A high standard deviation can be legitimate, but can sometimes indicate 'gaming' is occurring. Consider a simplified example* of an item receiving ratings of 100, 50, & 0. The mean average rating would be 50. However, ratings of 55, 50 & 45 could also result in the same average. The second average might be more trusted because there is more consensus around a particular rating (a lower deviation).
(*In practice, some albums can have several thousand ratings)
This album is rated in the top 20% of all albums on BestEverAlbums.com. This album has a Bayesian average rating of 74.6/100, a mean average of 74.0/100, and a trimmed mean (excluding outliers) of 74.7/100. The standard deviation for this album is 11.3.

What a piece of Art, Stu continues his perfectionism, an album you can hear from the beginning to end, gorgeous material

King Giz can do whatever they want, do it well, and still sound King Gizzy. What a fun album.

Not the best album they have and not their usual sound, but that's what makes it so good. King Gizzy rest a little from their neo-psychedelia and make a fantastically fun album laden with boogie and tinged with an environmental message.

Now that they had completed their challenge in 2017 with five albums, it was time for King Gizzard & The Lizard Wizard to rest a little bit. The crazy and prolific Australian band of Stu MacKenzie had thus published nothing last year. So in 2019 they come back with their fourteenth album entitled "Fishing For Fishies". What is certain, King Gizzard & The Lizard Wizard have not lost their energy overflowing. There is no doubt that King Gizzard & The Wizard Lizard has a little too exploded on this "Fishing For Fishing". The band has tried to make a blues album stained boogie for an exuberant and a little disappointing result but that does not interfere with the creative freedom of these Australians who have become legends of psychedelic rock.

King Gizz still shows continuous growth with this new bluesy LP. It hits hard with its tight production and unique vibe, managing to keep Rock alive and making it sound fresh for a little while longer.

I also love the final moments on Acarine, which are a pretty adventurous transition to cross from the Rock realm to whatever Cyboogie is. This last track sounds very silly at first but I've grown to enjoy it over time. KG&TLW tends to be silly-sounding sometimes but Cyboogie pushes it a little further.

It has something special, original, creative... These guys might be one of the best bands of this 21st century...

After first listen I wasn't impressed at all, but now I'm in love with it! Even Cyboogie which wasn't my favourite when they released it as a single is now a killer track. It's maybe not in top 5 Gizzard albums, but it's consistently fun and well-written record which makes me wanna be eco-conscious.

The boys have done it again! Fantastic album from start to finish, it only grows on me the more I listen to it. Gizz will never cease to amaze me.

I've always respected these guys, but have been rather indifferent towards their music. Call me a believer after listening to this. Fun, groovy and heady.

Your feedback for Fishing For Fishies