Use Your Illusion (compilation album) by Guns N' Roses 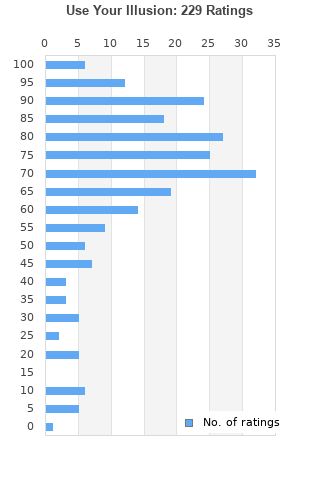 Use Your Illusion is ranked 5th best out of 9 albums by Guns N' Roses on BestEverAlbums.com.

The best album by Guns N' Roses is Appetite For Destruction which is ranked number 116 in the list of all-time albums with a total rank score of 13,537. 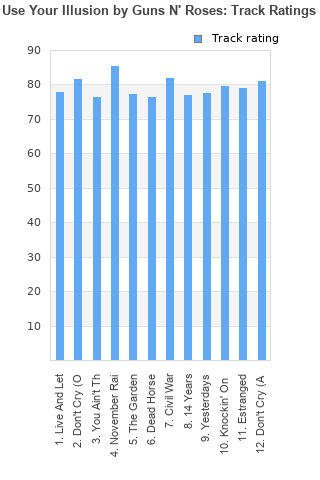 Use Your Illusion rankings

Use Your Illusion collection

Use Your Illusion ratings

Rating metrics: Outliers can be removed when calculating a mean average to dampen the effects of ratings outside the normal distribution. This figure is provided as the trimmed mean. A high standard deviation can be legitimate, but can sometimes indicate 'gaming' is occurring. Consider a simplified example* of an item receiving ratings of 100, 50, & 0. The mean average rating would be 50. However, ratings of 55, 50 & 45 could also result in the same average. The second average might be more trusted because there is more consensus around a particular rating (a lower deviation).
(*In practice, some albums can have several thousand ratings)
This album has a Bayesian average rating of 68.0/100, a mean average of 67.8/100, and a trimmed mean (excluding outliers) of 67.8/100. The standard deviation for this album is 22.7.

Use Your Illusion favourites

Use Your Illusion comments

I feel sorry for people who only know Guns ‘n’ Roses from Appetite for Destruction. Sure it had the biggest hits and is a fantastic album, but the band moved on to so much more. While Appetite was a blast of hard rock with a mean attitude Use Your Illusion is a sprawling epic covering blues, country, quasi-rap and industrial, while rocking hard all the time. Yes it’s bloated, clocking in at 2½ hours it’s not what you’d call short, but it changes tempo and theme so often it never really drags. Technically it is two albums but they were recorded in the same session and have identical yet palette swapped artwork, so I count them as one.\r\nThis album could be seen as a semi-autobiographical; thematically it is certainly a trip through Axl’s twisted mind. Every influence or musical passion is crammed in; covering Dylan and McCartney. Samples are used to great effect on “Civil War” and “Coma”. It spits out insults, literally, on “Get In The Ring”. Drugs are sung about, booze is sung about and you better believe women are sung about too. The final song hastily tries to justify itself; “You want to step into my world? It\'s a sociopsychotic state of bliss!”\r\nProficiently every member is on form, Slash does his thing and the drummer puts in a damn good show. This is through and through Axl’s album though. I maintain he is easily one of the best front men, “My World” is some first class crazy yelping and on “Coma” his voice reaches breaking point but somehow he keeps on one upping himself in the dizziest crescendo I know of.\r\nNo matter what genre you like, you’ll find something new on these albums and if you’re sick of “Paradise City” there is plenty more out there. May I also recommend “The Spaghetti Incident”. Granted it has the worst album artwork ever and was recorded just as the wheels fell off on GNR, but this collection of covers is very fun and kinda continues from where Illusion left off.\r\nMore reviews at http://captainspacker.blogspot.com/

Is not possible to do a single album from two big albums like Use Your Illusion I & II. It seems something like the Greatest Hits compilation of sevaeral years ago... Very commercial!

What the hell is this?

Should this even be a listing? Isn't it two albums lumped together? Can't argue with the quality of the tracks, but...

Your feedback for Use Your Illusion