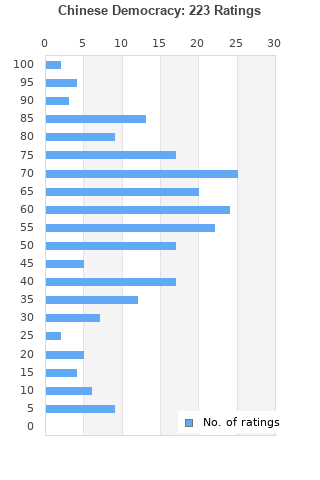 Chinese Democracy is ranked 6th best out of 9 albums by Guns N' Roses on BestEverAlbums.com.

The best album by Guns N' Roses is Appetite For Destruction which is ranked number 115 in the list of all-time albums with a total rank score of 13,814. 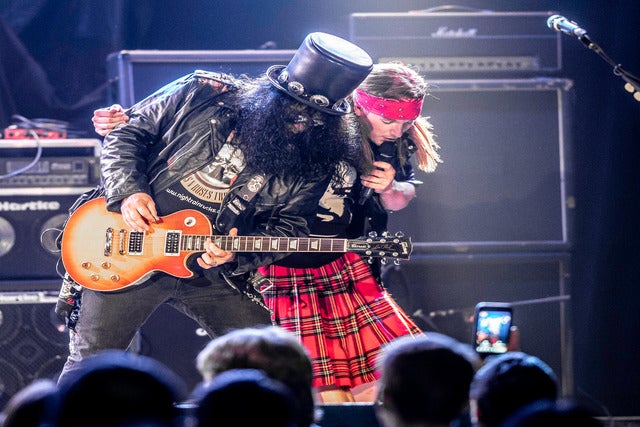 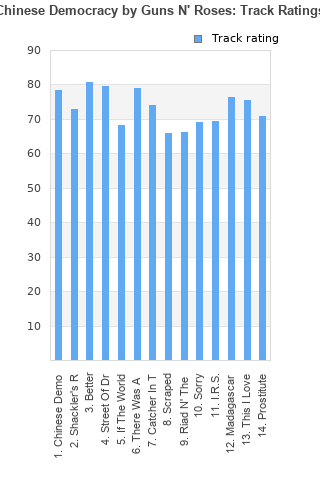 Rating metrics: Outliers can be removed when calculating a mean average to dampen the effects of ratings outside the normal distribution. This figure is provided as the trimmed mean. A high standard deviation can be legitimate, but can sometimes indicate 'gaming' is occurring. Consider a simplified example* of an item receiving ratings of 100, 50, & 0. The mean average rating would be 50. However, ratings of 55, 50 & 45 could also result in the same average. The second average might be more trusted because there is more consensus around a particular rating (a lower deviation).
(*In practice, some albums can have several thousand ratings)
This album has a Bayesian average rating of 55.9/100, a mean average of 55.1/100, and a trimmed mean (excluding outliers) of 55.1/100. The standard deviation for this album is 22.3.

This is so far from "Appetite For Destruction"! It is almost on another planet. Very few highlights. Disappointing after waiting for so long. Rating (73.21)

Two stars only due to Tommy Stinson's bass playing. With no Stinson - no stars.

I don't think it's as bad as others make it out to be, but it's not really a great album. The title track is the best song, but it's a really unfocused album. Axl really needs Slash, Duff and Izzy to restrain him and help him out.

Buckethead and Axl are a great combination. This is a very good/ excellent album despite its reputation as a failure in some circles. Every track with Buckethead is first rate. A truly under appreciated album.

Whether it's good or bad is almost irrelevant(it's bad, by the way), but the main thing is it's NOT Guns'n'roses, it's Axl Rose on the most expensive and long drawn out ego trip ever.

The "Guns n' Roses" tag hindered this album on release, with everyone still not over the "classic" line up. Had it been released by "Axl Rose & The Papercuts" or similar, tracks like "Shackler's Revenge" & "If The World" may have had critics applauding Axl for not resting on his laurels & moving with the times. It doesn't always work perfectly, but much rather this than them endlessly trying to remake an instant classic, the way Rage Against The Machine did (although "Street of Dreams" is admittedly a vintage Axl ballad, but a good one!)

Don't get the bad rating. This is sure very different from old GNR but it brings fresh meat on the table. Axl wrote some beautiful songs for this record like: Better, There Was a Time and Catcher in the Rye. The only thing is that not all the songs are strong enough to build a very solid album. For the ones who approach this album, remember: this is not a easy listen and the album will grow on you if you give it enough time. Finck and Buckethead on guitar are supreme and Axl's voice is not bad at all!

Despite the presence of good ideas in the songwriting process, most of the songs are not memorable and you can feel the excessive length of the album. The result is mediocre.

Your feedback for Chinese Democracy