Then Play On (studio album) by Fleetwood Mac 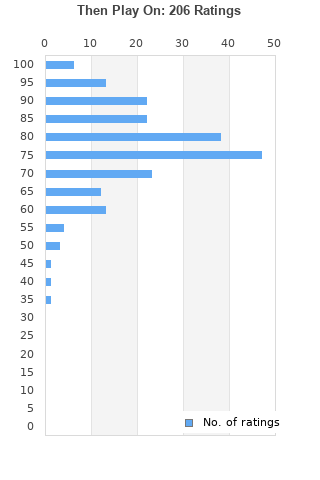 Then Play On is ranked 5th best out of 41 albums by Fleetwood Mac on BestEverAlbums.com.

The best album by Fleetwood Mac is Rumours which is ranked number 24 in the list of all-time albums with a total rank score of 36,213. 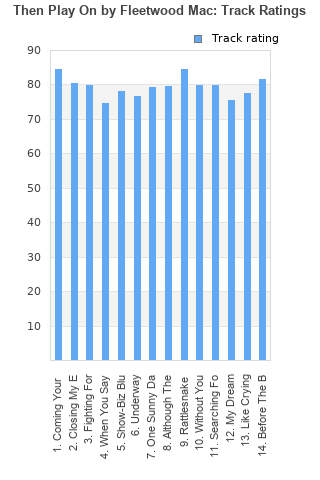 Then Play On rankings

Then Play On collection

Then Play On ratings

Rating metrics: Outliers can be removed when calculating a mean average to dampen the effects of ratings outside the normal distribution. This figure is provided as the trimmed mean. A high standard deviation can be legitimate, but can sometimes indicate 'gaming' is occurring. Consider a simplified example* of an item receiving ratings of 100, 50, & 0. The mean average rating would be 50. However, ratings of 55, 50 & 45 could also result in the same average. The second average might be more trusted because there is more consensus around a particular rating (a lower deviation).
(*In practice, some albums can have several thousand ratings)
This album is rated in the top 4% of all albums on BestEverAlbums.com. This album has a Bayesian average rating of 77.6/100, a mean average of 77.4/100, and a trimmed mean (excluding outliers) of 77.8/100. The standard deviation for this album is 11.7.

Then Play On favourites

Then Play On comments

The slightly proggy album is a pleasant surprise.

Why Peter Green's FM used to put all their best in the singles?! if you add some b sides on this album you should have had one of the top 100 albums ever. Oh Well...

This album has a couple flaws that keep it from being great. Handful of pretty dull tracks that really brings down the energy in all the wrong places, namely When You Say. For an optimal listening experience, I recommend the revised US version of this album that was released in November of 1969, cuts out a lot of the fluff of the original album and adds on Oh Well.

An album listened to more than 400 times is not just any album, it's The Album! For those who don't understand just listen to it and be uplifted!

US CD include Oh Well which is the best track

Last good Fleetwood Mac album before they went into a four year slump.

The best album produced by the best British blues guitarist, Peter Green. WARNING: this isn't your "Don't Stop" Fleetwood Mac -- this is closer to a mix of Cream and Zeppelin.

Your feedback for Then Play On