Meat Is Murder (studio album) by The Smiths 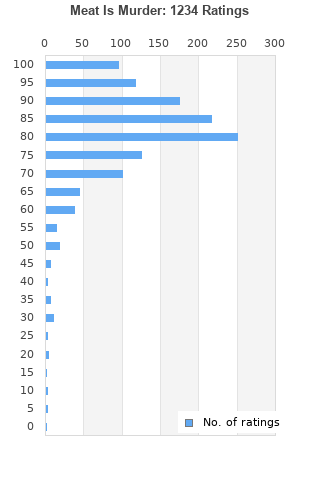 Meat Is Murder is ranked 3rd best out of 15 albums by The Smiths on BestEverAlbums.com.

The best album by The Smiths is The Queen Is Dead which is ranked number 19 in the list of all-time albums with a total rank score of 43,748. 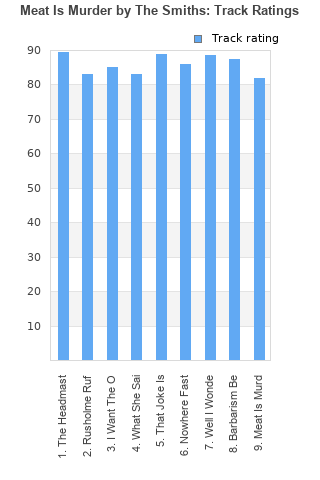 Rating metrics: Outliers can be removed when calculating a mean average to dampen the effects of ratings outside the normal distribution. This figure is provided as the trimmed mean. A high standard deviation can be legitimate, but can sometimes indicate 'gaming' is occurring. Consider a simplified example* of an item receiving ratings of 100, 50, & 0. The mean average rating would be 50. However, ratings of 55, 50 & 45 could also result in the same average. The second average might be more trusted because there is more consensus around a particular rating (a lower deviation).
(*In practice, some albums can have several thousand ratings)
This album is rated in the top 1% of all albums on BestEverAlbums.com. This album has a Bayesian average rating of 81.9/100, a mean average of 80.5/100, and a trimmed mean (excluding outliers) of 82.0/100. The standard deviation for this album is 14.7.

Incredibly consistent album. Some of Morrissey's best (and naturally most dark) lyrics are on this album - That Joke Isn't Funny Anymore shows compassion for people who are depressed, The Headmaster Ritual and Barbarism Begins at Home explores child abuse, the title track although admittedly preachy is also beautifully written. Some highlights lyrically are "Sir please excuse me from gym, I've got this terrible cold coming on, he grabs and devours, he kicks me in the showers" (Headmaster Ritual), "She is famous, she is funny, an engagement ring doesn't mean a thing to a mind consumed by brass and money" (Rusholme Ruffians) but there are so many more.

The only forgettable song is What She Said but that is still a nice track. My highlights are Barbarism Begins at Home, Well I Wonder and The Headmaster Ritual.

Get a CD with How Soon Is Now and it's hands-down their best album. It feels like the album was always meant to have that track in that exact sequence.

This is the most energetic this band ever got and their most consistently-good songwriting, the title track drags but everything before that is one catchy, memorable hook after the other without any of the fat that makes up a few tracks on Queen Is Dead.

Highs: The Headmaster Ritual, I Want The One I Can't Have, Well I Wonder

When discussing The Smiths within musical circles, many would cite The Queen is Dead's politically-laced barrages of sound or perhaps the shyly-communicated romantic and physical insecurities of the band's brilliant debut record. When Meat is Murder eventually surfaces in conversation, it comes embroidered with the tagline, "The one where Morrissey pontificates about vegan ideals?" While it's certainly true that the album's title track is just as preachy as it is powerful, the record stands (albeit mostly unseen by most) as one of the band's most consistently brilliant outings. One could certainly attest to this album being the most varied in the discography, fluctuating between windswept, idyllic ballads and guitar-driven, rebellious canticles. This stylistic grab bag usually results in an uneven sonic experience, however, with the collective talent on hand, The Smiths deliver a master stroke markedly representative of their entire body of work.

The Headmaster Ritual kicks off the record, which serves as the band's statement on corporal punishment in educational settings. Marr's guitar is promptly infectious on the track, serving as the skeleton of the song while Mike Joyce's drum hits assume the figure of a percussive heart. Morrissey's yowls can be found scattered throughout, bridging between condemning cries of "Belligerent ghouls, run Manchester schools, spineless bastards all." The frontman's personal experiences can certainly be inferred upon here. It's possible his inclination towards artistic pursuits and not athletics made his time at school tumultuous. The Headmaster Ritual is a potent opener, flaunting wondrous instrumentation and inciting social discourse. Track two entitled, Rusholme Ruffians, conjures a carnival scene set against the backdrop of a hot summer evening in Manchester. Morrissey, from a lyrical standpoint, relays his most satirical skepticisms. He beckons, "Scratch my name on your arm with a fountain pen, this means you really love me." He then recants (slightly), proclaiming that his "faith in love is still devout". Sixth track, Nowhere Fast, continues with all things snide, although far less concealed. Lyrics such as, "I'd like to drop my trousers to the Queen, every sensible child will know what this means" serve as a playful foreshadowing of political sentiments to follow. Marr's rockabilly rhythms once again propel the track reiteratively interlocked with Joyce's dependable drumming. For the quintet, Nowhere Fast acts as the musical equivalent of "cocking a snook". The album then coasts into seventh track, Well I Wonder, manifesting as part lullaby and epitaph. The appropriate visual accompaniment is that of beads of rain wandering down a windowpane as the sound of the drops patter overhead. Morrissey's vocal delivery is painful serene here as he croons, "Gasping, but somehow still alive, this is the fierce last stand of all I am." Andy Rourke's bass work creates a sense of space for the vocals, constructing a visual of Morrissey transmitting from the deepest, ghastliest alleyway where his pained but gorgeous falsettos only go as far as the wind takes them.

Morrissey's polarizing views on meat-infused diets, (comparing meat eating to child abuse and biting into your grandmother among others), often lampoon the album as an extension of those divisive statements. These snippets, nevertheless, should not detract from what an immense triumph this record still is, despite the idealogical load it must unfairly saddle. The Smiths were indeed two steps ahead of most of their contemporaries in the 1980's and routinely reduced similar-sounding groups to cut-rate emulations. Coinciding with their imminent prime was Meat is Murder, a stirring collection of some of The Smiths' finest musical exertions, layered and textured both in instrumentation and poetic capability. Ignominiously, It continues to remain back-seated when pitted against other Smiths discography entries. Oddly enough, you'll "get a crack on the head" for daring to bring it up.

"This is the last night of the fair,
and the grease in the hair,
of a speedway operator
is all a tremulous heart requires.
A schoolgirl is denied
She said : "How quickly would I die
If I jumped from the top of the parachutes?"

Really good, on par with the debut.

Favorites: The Headmaster Ritual; I Want The One I Can't Have; What She Said; That Joke Isn't Funny Anymore; Nowhere Fast; Well I Wonder.

Your feedback for Meat Is Murder