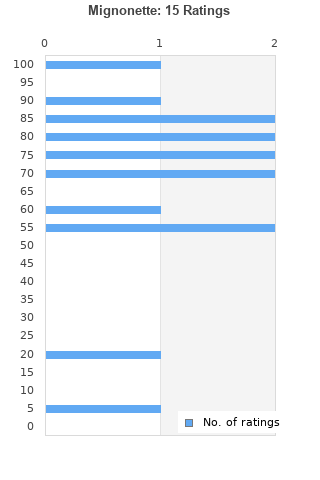 The Avett Brothers-Mignonette CD NEW
Condition: Brand New
Time left: 7d 8h 50m 3s
Ships to: Worldwide
$19.80
Go to store
Product prices and availability are accurate as of the date indicated and are subject to change. Any price and availability information displayed on the linked website at the time of purchase will apply to the purchase of this product.  See full search results on eBay

Mignonette is ranked 7th best out of 14 albums by The Avett Brothers on BestEverAlbums.com. 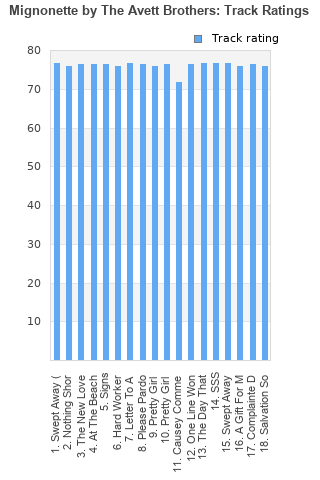 Rating metrics: Outliers can be removed when calculating a mean average to dampen the effects of ratings outside the normal distribution. This figure is provided as the trimmed mean. A high standard deviation can be legitimate, but can sometimes indicate 'gaming' is occurring. Consider a simplified example* of an item receiving ratings of 100, 50, & 0. The mean average rating would be 50. However, ratings of 55, 50 & 45 could also result in the same average. The second average might be more trusted because there is more consensus around a particular rating (a lower deviation).
(*In practice, some albums can have several thousand ratings)
This album has a Bayesian average rating of 69.9/100, a mean average of 67.5/100, and a trimmed mean (excluding outliers) of 67.5/100. The standard deviation for this album is 25.5.

Of this album Steve Le Bate wrote for Paste Magazine, "The true story anchoring this inspiring, heartbreaking album is one of a British crew whose yacht, the Mignonette, was lost in a storm off the coast of Africa in 1884. Four survivors escaped in a tiny boat with no food or water and--after being stranded for 19 days--ate the weakest member of their party. Upon being rescued, one guilt-wracked crew member confessed to the group’s desperate act, revealing the truth even when it meant they’d all be executed. So--long story short--the Avetts wanted to capture not only the tragedy of this twisted tale, but the unshakeable honesty of its protagonist." I didn't know any of that until today, and it blows my mind. It provides perfect context for the guileless sincerity of the Avett Brothers' work, particularly on the almost embarrassingly mawkish "Swept Away," a sweet and tender ballad attended by their usual melodic blend of traditional bluegrass instrumentation and indie folk earnestness.

This is not an atmospheric listen nor a production masterpiece- this is a collection of songs that represent a culture of familial values, love, and simple pleasures.

Wow….Never has there been a greater Americana band than the Avetts, and this is their masterpiece. At 18 songs, it's a sprawling work, and this record has the perfect track listing. Seriously, these songs could not have fit together any better than they do. Build a fire, sit back, and sing along.

Your feedback for Mignonette