Late For The Sky (studio album) by Jackson Browne 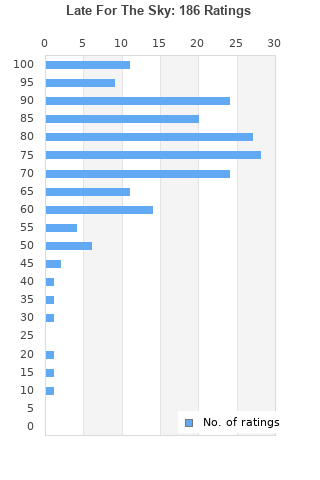 Jackson Browne "Late For the Sky" LP Vinyl Asylum Records 1974 VG
Condition: Used
Time left: 15h 55m 25s
Ships to: Worldwide
$10.00
Go to store
Product prices and availability are accurate as of the date indicated and are subject to change. Any price and availability information displayed on the linked website at the time of purchase will apply to the purchase of this product.  See full search results on eBay

Late For The Sky is ranked as the best album by Jackson Browne. 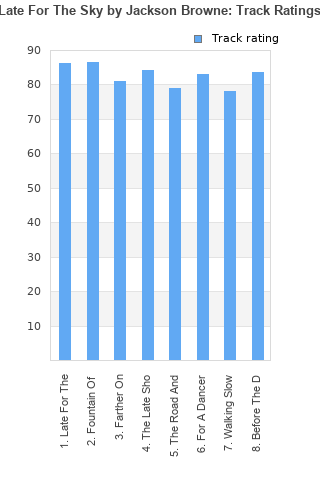 Late For The Sky rankings

Late For The Sky collection

Late For The Sky ratings

Rating metrics: Outliers can be removed when calculating a mean average to dampen the effects of ratings outside the normal distribution. This figure is provided as the trimmed mean. A high standard deviation can be legitimate, but can sometimes indicate 'gaming' is occurring. Consider a simplified example* of an item receiving ratings of 100, 50, & 0. The mean average rating would be 50. However, ratings of 55, 50 & 45 could also result in the same average. The second average might be more trusted because there is more consensus around a particular rating (a lower deviation).
(*In practice, some albums can have several thousand ratings)
This album is rated in the top 5% of all albums on BestEverAlbums.com. This album has a Bayesian average rating of 76.9/100, a mean average of 76.4/100, and a trimmed mean (excluding outliers) of 77.2/100. The standard deviation for this album is 15.3.

Late For The Sky favourites

Late For The Sky comments

THE most underrated album in music. The instrumentation is nothing to write home about save the wonderful steel guitar, but THE LYRICS are some of the best ever written. It's like being broken up with and having a series of epiphanies through fits of crying. Knowing that you both tried your best, but it just wasn't good enough, and it might not ever be.

But you carry on anyway, through all of your dreams having been shattered, and knowing that the rest of your life will probably be a disappointment too.

To give a non-fan perspective, I have to say that I just don't get this album. If I listened hard, I am sure the lyrics would be poetic and betray a very decent, perspicacious, human man behind them. But...this is meant to be music, not poetry first and foremost, and I find its melodies/tunes lack anything to impress my ears, being instead an easy listening, if rather dreary and directionless, dare I say it, mediocrity. Pleasant-ish, but lacking in even an occasional spark.

Jackson Browne's greatest album. It's a stunningly beautiful record featuring some of Browne's best ever compositions. The title track is excellent, my favourite of all his songs, but there is plenty more on offer here. Fountain of sorrow, for a dancer, and, before the deluge, are three other standouts on an album full of them, although, walking slow, is easily the weakest track. Still, if you want the ultimate country rock record, this is the place to start.

The definite highlight of his career and hands down the best album the early 70's singer-song writer wave had to offer. Thpugh not purely sticking to the man and a guitar format. These songs tie in themes such as loss of loved ones and romaticism in a pre-apocalyptic world. It offers a mature view on death. A dimmed one on Life. The protestant preachy style is very unique and perfectly in line with Brownes voice. The sheer pureness the songs are sung remains unmatched by contemporaries such as Randy Newman or James Taylor.
An album that can move someone to tears.

Thanks to BEA for showing me that Jackson Browne had other great folk-rock albums apart from "Running on Empty". The album starts with the calm and beautiful (both lyrically and musically) title track to go on to a faster tempo "Fountain of Sorrow" which uses that Dylan trick of continuing when you think it's over. Those two may be the best tracks here but the album flows well till the end.

Many consider this Browne's finest album. Perhaps. It has a sweet, elegiac quality that's pleasantly soothing in that singer-songwriter kind of way. Browne and David Lindley contribute some lovely guitar work. Recommended.

It really marks the end of his brilliant acoustic period in classic fashion.

Your feedback for Late For The Sky