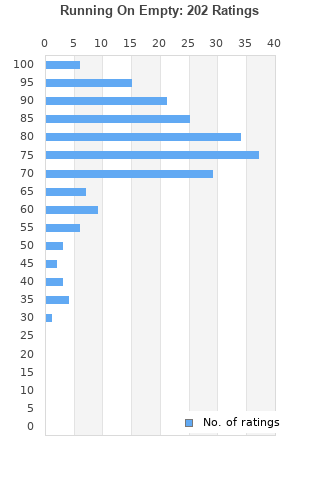 Jackson Browne - Running On Empty LP VG+ 6E-113 1977 USA Vinyl Record
Condition: Used
Time left: 5h 8m 54s
Ships to: Worldwide
$15.00
Go to store
Product prices and availability are accurate as of the date indicated and are subject to change. Any price and availability information displayed on the linked website at the time of purchase will apply to the purchase of this product.  See full search results on eBay

Running On Empty is ranked 2nd best out of 18 albums by Jackson Browne on BestEverAlbums.com.

The best album by Jackson Browne is Late For The Sky which is ranked number 1354 in the list of all-time albums with a total rank score of 1,318. 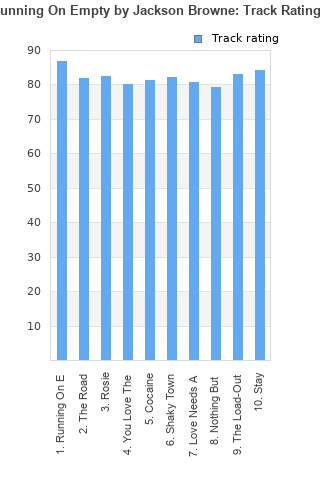 Rating metrics: Outliers can be removed when calculating a mean average to dampen the effects of ratings outside the normal distribution. This figure is provided as the trimmed mean. A high standard deviation can be legitimate, but can sometimes indicate 'gaming' is occurring. Consider a simplified example* of an item receiving ratings of 100, 50, & 0. The mean average rating would be 50. However, ratings of 55, 50 & 45 could also result in the same average. The second average might be more trusted because there is more consensus around a particular rating (a lower deviation).
(*In practice, some albums can have several thousand ratings)
This album is rated in the top 9% of all albums on BestEverAlbums.com. This album has a Bayesian average rating of 75.9/100, a mean average of 75.8/100, and a trimmed mean (excluding outliers) of 76.1/100. The standard deviation for this album is 14.4.

A live album of new material. It's an enjoyable record, but there's nothing spectacular here. It's all very competent and enjoyable, but it's hardly, late for the sky, but it's passable.

I love this album, maybe because it was one of the first "good" albums I liked when I was small and my parents had it on their car. It is a mixture of country, folk and pop rock in which a very talented artist with good musicians play this album (all unrealeased songs to that date) live. I tend to like studio albums but it's true that thanks to them playing live you can hear the musicians cope together, the audience's reaction... and you sort of get into those 1977 concerts. My favourite part is the blending of the last two tracks (Load Out/Stay) into one upbeat, heartfelt and musically varied song.

Reading the previous comments, it seems that I am not the only one who enjoys playing this album on the car :P

The quintessential road album. If your stuck on a long drive and the radio is boring the shit out of you I play this. A tatty old CD is in my glove box of the car and that is where it stays. A great album and Brownes and it's a live one. Am I suggesting that this is the best live album ever mmmm it certainly isn't but it does earn it's place in my music collection

Contains two of his standards: "Running on Empty" and "The Load Out / Stay."

I normally dislike live albums but this is one of the few great ones. Listening to this is like taking a journey. I once drove from Indiana to Texas with no radio but an 8-track tape player (I know my age is showing) and a copy of Running on Empty. I listened to it all the way there and back and didn't tire of it.

A gorgeous, all but forgotten album of road songs. I've had this in and out of my top 100 and I'm not sure I'm justified in dropping it. It's criticized for being self-indulgent but eff that. There are gorgeous, gorgeous songs here including The Road, Load Out/Stay, Rosie, the titler... and the rest is not a bad song in the bunch.

First Jackson Browne album I listened to, my second favourite by him

It is ironic that the song that propelled this album into an 8 million seller was the one song he didn't write (Stay)...My fav is "the Road"

I don't know what more I could ask from an album. It's enjoyable, interesting and honest. Every track is good.

Your feedback for Running On Empty