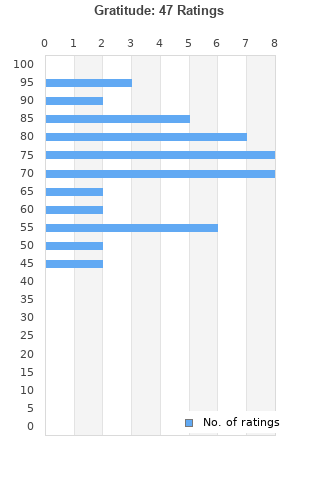 Gratitude is ranked 2nd best out of 28 albums by Earth, Wind & Fire on BestEverAlbums.com.

The best album by Earth, Wind & Fire is That's The Way Of The World which is ranked number 4018 in the list of all-time albums with a total rank score of 349. 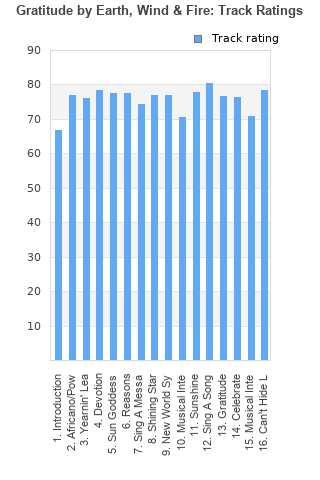 Rating metrics: Outliers can be removed when calculating a mean average to dampen the effects of ratings outside the normal distribution. This figure is provided as the trimmed mean. A high standard deviation can be legitimate, but can sometimes indicate 'gaming' is occurring. Consider a simplified example* of an item receiving ratings of 100, 50, & 0. The mean average rating would be 50. However, ratings of 55, 50 & 45 could also result in the same average. The second average might be more trusted because there is more consensus around a particular rating (a lower deviation).
(*In practice, some albums can have several thousand ratings)
This album has a Bayesian average rating of 73.3/100, a mean average of 73.4/100, and a trimmed mean (excluding outliers) of 73.4/100. The standard deviation for this album is 13.1.

A Massive double album when it was released in 1975, "Gratitude" was a landmark album by the predominately African American populated R & B group. Combining live cuts taken from a nationwide tour and interspersing in Studio Tracks of another five additional new songs, Earth, Wind and Fire brought their funk to new heights and widened their audience. Philip Bailey sounds terrific on the live version of "Reasons" reaching seemingly unattainable soprano falsetto, and elsewhere. The studio version of the title track, is driven by Maurice and Verdine White, demonstrating their kinetic kinship bond that was evident throughout their career. An early career highlight.

Your feedback for Gratitude