Yellow Submarine (album) by The Beatles 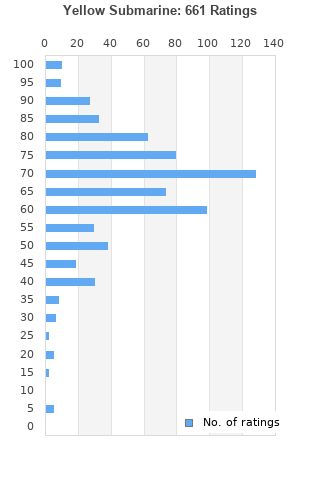 Yellow Submarine is ranked 18th best out of 65 albums by The Beatles on BestEverAlbums.com.

The best album by The Beatles is Abbey Road which is ranked number 3 in the list of all-time albums with a total rank score of 84,891. 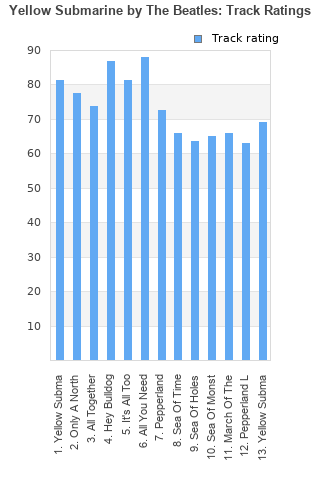 Outliers can be removed when calculating a mean average to dampen the effects of ratings outside the normal distribution. This figure is provided as the trimmed mean. A high standard deviation can be legitimate, but can sometimes indicate 'gaming' is occurring. Consider a simplified example* of an item receiving ratings of 100, 50, & 0. The mean average rating would be 50. However, ratings of 55, 50 & 45 could also result in the same average. The second average might be more trusted because there is more consensus around a particular rating (a lower deviation).
(*In practice, some albums can have several thousand ratings)
This album has a mean average rating of 66.0/100. The trimmed mean (excluding outliers) is 66.9/100. The standard deviation for this album is 16.8.

Showing latest 10 comments | Show all 35 comments | Most Helpful First | Newest First
(Only showing comments with -2 votes or higher. You can alter this threshold from your profile page. Manage Profile)

"It's All Too Much" alone is worth the high rating.

Without a doubt the least essential Beatles album. It should have been an EP but because of an obscure agreement between George Martin and Beatles manager Brian Epstein, it was expanded into a full album. So it could include instrumentals by Martin. Side One is good but unfortunately contains music previously released. Hey Bulldog is a new track and is brilliant as is George’s underrated psychedelic masterpiece It’s All Too Much. Side two contains George Martin’s instrumental scores and is fairly inessential. Overall, worth hearing, but not an essential purchase.

This doesn't feel like a real Beatles album to me. The second half is the soundtrack to the movie and the first half is a mix of new and previously released songs. There's definitely still some good [new] songs here, Hey Bulldog, All Together Now, It's only a Northern Song, but overall it's a disappointing album.

Kind of a drag. Still worth a listen.

A Soundtrack that is miles behind "Magical Mistery Tour". The only unpublished song here that stands out is "Hey Bulldog", a brilliant song in every aspect.

Well Hey Bulldog is worth a lot of stars and I actually really like the instrumental flipside, but other than that I think it's quite a weak album from the band. The two Harrison songs don't really do anything for me, and Paul's All Together Now is also a filler, but again Hey Bulldog, what a great tune!!

Side 1: Some of the Beatles best work
Side 2: Good, but nothing amazing

All You Need is Love is an absolutely classic. The other songs by the Beatles are ok, but they come with little flow to the album and really, are bog average when compared to any other Beatles song. Martin's second half is good, but only when you consider context, this isn't really an album, its a bit boring to listen to, but I suppose with the film in the background, it would be fine.

The soundtrack album to the film of the same name. The first side, in old money, consists of six Beatles songs, the second side is George Martin's orchestral score. Of the songs on the first side, two had been previously released in, all you need is love, and the title track. Of the four 'new' songs, best of the bunch is John's, hey bulldog. George's only a northern song, is good, but certainly not good enough to be included on Sgt. Pepper, to which is was originally intended, at least by George. The other, it's all too much, is ok, but after a few minutes it really is all too much. Paul's children's song, all together now, is acceptable for what it is, although not many children's songs include the line, 'can I take my friend to bed'. George Martin's orchestral score is fine, but like the album as a whole, it's a little insubstantial. Easily the least essential of all Beatles albums.

Your feedback for Yellow Submarine