Love (studio album) by The Beatles 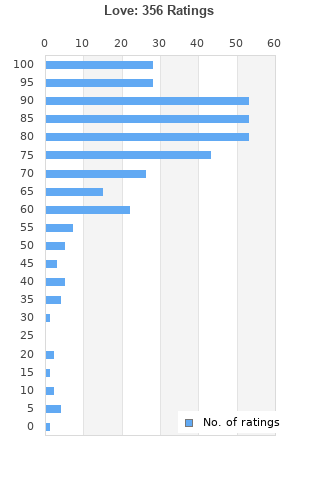 Love is ranked 18th best out of 66 albums by The Beatles on BestEverAlbums.com.

The best album by The Beatles is Abbey Road which is ranked number 3 in the list of all-time albums with a total rank score of 73,868. 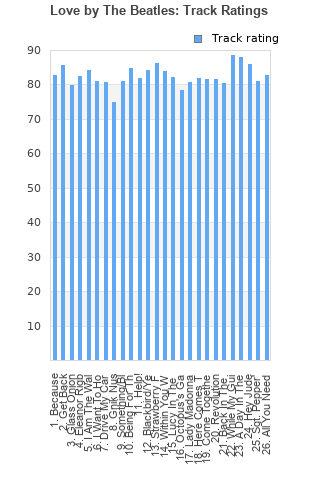 Rating metrics: Outliers can be removed when calculating a mean average to dampen the effects of ratings outside the normal distribution. This figure is provided as the trimmed mean. A high standard deviation can be legitimate, but can sometimes indicate 'gaming' is occurring. Consider a simplified example* of an item receiving ratings of 100, 50, & 0. The mean average rating would be 50. However, ratings of 55, 50 & 45 could also result in the same average. The second average might be more trusted because there is more consensus around a particular rating (a lower deviation).
(*In practice, some albums can have several thousand ratings)
This album is rated in the top 2% of all albums on BestEverAlbums.com. This album has a Bayesian average rating of 79.0/100, a mean average of 77.1/100, and a trimmed mean (excluding outliers) of 79.2/100. The standard deviation for this album is 18.5.

I see this as them trying to make a greatest hits for the type of people who sneer at greatest hits, myself included I guess. By changing the songs you’re offering a new experience, a greatest hits to most music lovers for a band as beloved as the Beatles is redundant, you likely already own all the songs. This though is new, it’s a reimagining, shame it pales so much in comparison to the original context of the songs. If for some reason you want a greatest hits, stick to 1. If you want to hear some familiars in a different context though, give it a shot, hopefully you get more out of it than I did.

I like it because the more familiar you are with the Beatles’ music the more you “get all the jokes.”

One of my favorite ways to listen to The Beatles. It runs like a Greatest Hits album or like a Beatles concert from 1970 that never happened. Some of the remixes on here breathe new life into Beatles songs we have all heard many times. In many ways these songs are better than the original. Of course, this is not an original album work by The Beatles but instead the producers George and Giles Martin. Recommended to any fan of The Beatles and it can be a great introduction to the band too. There is not one bad song on the album.

When I borrowed this album I thought it was a collection of hits and would be so so. I put it in my car stereo and listen to Because then transition to Get Back and WOW WOW WOW.
I couldn't wait to get home and listen to it with headphones. I listen to the full album over 20 time in a month.
All the songs are remastered and remix making each song completely NEW.
Don't overlook this album it is an absolute masterpiece. Enjoy this album with headphones and it will be one of your favorite.

Everyone has so-far failed to mention this was a commissioned work by cirque du soleil for a Las Vegas production. That is it's raison d'etre. Knowing that it was mixed from the original master tapes by Sir George Martin, with assistance from his son and Sir Paul McCartney should give it some added credence. The goal was a modern mash-up of the Beatles catalog, and I for one believe they succeeded brilliantly. I thoroughly enjoyed the alternate takes and rough sketches blended with the studio works we all know.

A very skilfully created and enjoyable remix of some of the Beatles most familiar, and not so familiar works. Blending 'Within You Without You' with 'Tomorrow Never Knows' creates a droning piece of raga-rock that's the best they never recorded. My only gripe is that the most interesting pieces of this album are to be found in those that use that alternate takes, such as 'Strawberry Fields' and 'While My Guitar Gently Weeps' - hearing these afresh really does lend them to be appreciated on a whole new level.

By no means a stand-in for the real thing, but if you love The Beatles then you'll like Love.

I might go as far to say this is my favourite album to listen to ever, but I feel it's not really an album in the sense everything else is, so I'm abstaining it from my chart.
If there was one thing The Beatles weren't so good at it was creating a cohesive body of work - even Sgt. Peppers Feels mostly like 3 incredible musicians doing their best to collaborate on the same record.
You take all of the Beatles best work and create a flowing piece from it, with a beginning and end, and you have something truly special. George Martin is a genius.

Although this is not a Beatles "Album" per say, it is ingenious workings of the 5th Beatle. It is amazing how he mixes and matches their work. If you are familiar with their discography, you will constantly get little bits of excitement and chills as the realiztions hit you- oh that's that, and this is that and I never would have thought how awesome they would've worked together. The Because-Get Back transition is simply amazing.

Your feedback for Love