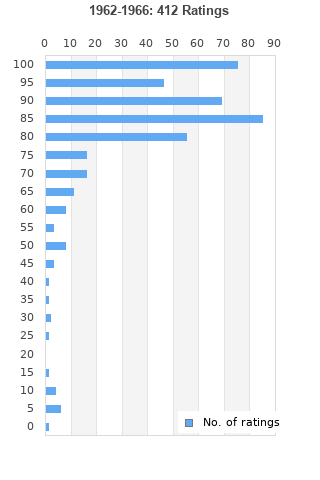 The best album by The Beatles is Abbey Road which is ranked number 3 in the list of all-time albums with a total rank score of 74,845. 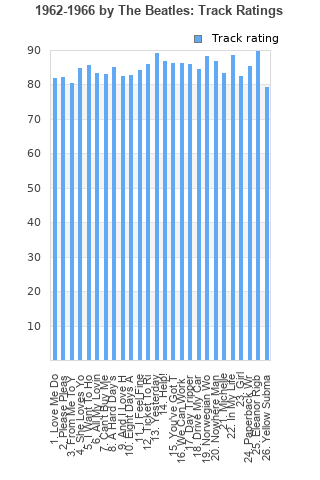 Rating metrics: Outliers can be removed when calculating a mean average to dampen the effects of ratings outside the normal distribution. This figure is provided as the trimmed mean. A high standard deviation can be legitimate, but can sometimes indicate 'gaming' is occurring. Consider a simplified example* of an item receiving ratings of 100, 50, & 0. The mean average rating would be 50. However, ratings of 55, 50 & 45 could also result in the same average. The second average might be more trusted because there is more consensus around a particular rating (a lower deviation).
(*In practice, some albums can have several thousand ratings)
This album is rated in the top 1% of all albums on BestEverAlbums.com. This album has a Bayesian average rating of 85.1/100, a mean average of 82.9/100, and a trimmed mean (excluding outliers) of 85.4/100. The standard deviation for this album is 18.7.

Fantastic compilation of the early stuff. Together with the 'Blue 1967-1970' you've got the greatest compilation set ever.

I always found it strange that this compilation has only 26 songs while 1967-1970 has 28. The songs are all under 3.5 minutes - they should have put more songs on it, not less, than 1967-1970 where the songs were mostly more than 3.5 minutes. 1966 is particularly underrepresented on this compilation with only 3 songs. Just think how much better this compilation would have been with the addition of Tomorrow Never Knows and Rain, at the very least. Even better with I Saw Her Standing There, Taxman, I'm Only Sleeping and For No One. Then it becomes an excellent summary of 1962 - 1966, and with 32 songs, would still be shorter than 1967-1970.

For me 1973 was Year I embraced the Beatles and the Red & Blue albums are the reason why...in hindsight are there better compilations; I.e. Anthology, Past Masters, Love, or number Ones? Maybe, it doesn’t matter as this was the starting point of my musical journey and I will always have a soft spot for both compilations

This is how I was introduced to The Beatles, one of the few listenable LPs that my parents owned. I played these two records over and over again. A pretty strong education, as it turns out.

This is the album that got me hooked on The Beatles. During a skiing trip when I was 12 years old I had this album with me on two cassettes, and I heard all the time. When I got home I started buying all their albums, and I have never looked back. Easily my favourite band in the whole world, and there is no chance that anyone will ever come close to kicking them away from the top of my all time music chart :)

Not a poor track amongst them

The only problem with the album is the omissions ..... But where would you stop ? What wouldn't you include ?? It could end up being a VERY long album !!

I remember a dinner party (in France) where the conversation was about what was the best beatles album. A girl in front of me said : "oh I love the red album". I said: "hang on, this is not an album but a compilation".I should have kept quiet because she answered in front of everyone, with a laugh of despise and irony, as if I was a complete nerd: "oh, oh, I see...a compilation...not the same indeed..." However, more than 20 years later, I (secretly) maintain it's not "the same":)

You guys moaning about not liking the compilations, saying stuff like you don't like them being removed from their "original albums", well, a lot of those songs weren't even originally on any albums. If you want certain songs, I.e; I feel fine, she loves you, paperback writer, lady Madonna, hey jude, the ballad of John and Yoko, and more, you need to buy the compilations. For example, if you wanted, we can work it out, you either have to buy the single disc, 1, the excellent mop up, but sonically uneven album, past masters, or this one. What are you going to do? . I would say this and it's companion album 1967-1970 are the most enjoyable Beatles compilations out there. Off course if you want, rain, revolution, you need, past masters, as well. Off course, you can simply download the tracks you want and make your own comps. I personally am like you, I'm not a big fan of compilations either, and with most bands/artists you can avoid them, with The Beatles/Stones/Who/Kinks, you can't, you simply need them. Anyway, if you've got all The Beatles LP's, the only compilation you need is, past masters, although that is the least enjoyable one.