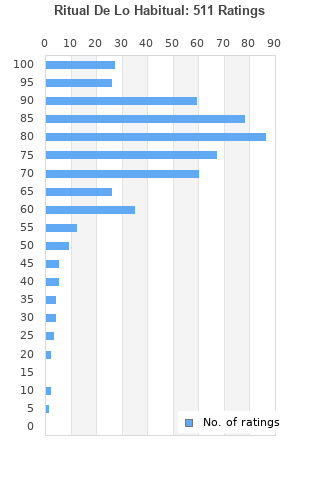 Ritual De Lo Habitual is ranked as the best album by Jane's Addiction. 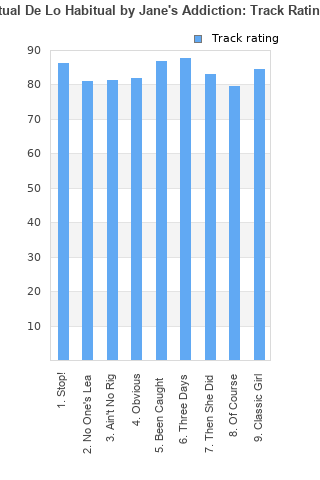 Rating metrics: Outliers can be removed when calculating a mean average to dampen the effects of ratings outside the normal distribution. This figure is provided as the trimmed mean. A high standard deviation can be legitimate, but can sometimes indicate 'gaming' is occurring. Consider a simplified example* of an item receiving ratings of 100, 50, & 0. The mean average rating would be 50. However, ratings of 55, 50 & 45 could also result in the same average. The second average might be more trusted because there is more consensus around a particular rating (a lower deviation).
(*In practice, some albums can have several thousand ratings)
This album is rated in the top 5% of all albums on BestEverAlbums.com. This album has a Bayesian average rating of 76.9/100, a mean average of 76.0/100, and a trimmed mean (excluding outliers) of 77.0/100. The standard deviation for this album is 15.7.

I like Obvious (great bass) and Three Days is a great 10-minute song, but the rest of the album was fairly uninteresting, I struggled to get in to it.

Alternative metal hard rock alternative rock funk metal neo-psychedelia
Only heard this in 2019 - didn't know what to expect. But it is loud and brash, interesting and some killer tunes

Took a long time for this album to gel with me. Listened to it a bit when I first got it, didn't overly hit a cord with me, so it sat gathering dust. Ten years later, pulled it out. Now it's one of my all time favorite. Something must've clicked. 'Three Days' being the highlight but all songs following it are just serene joy. My, how one's tastes can obviously change. A masterpiece of the Alternative genre.

I've found myself very conflicted by this record. I really like the music, I think all of the instrumentalists in this band are super underrated, especially Dave Navarro. However, I'm not similarly enthusiastic about the vocals. There are multiple moments in each song where I find myself cringing at Perry Farrell's voice, especially at the beginning of Ain't No Right. He's not a good singer, whoever told him that he was was obviously playing some kind of cruel, cruel joke on him. But then I circle back around to the music, it's really great here. They're one of the pioneers of alternative metal, though they come off as more rock here than metal, and this was a jumping off point for many other 90s bands. I have to give them props for that.

As part of the Rock culture, Perry Farrell deserves a lot more recognition than the one he has. In a way, he impersonates what Alternative Rock was all about during the late 80s and early 90s.

And to me, with songs like Three Days or Stop, Ritual De Lo Habitual sums up his entire sound.

Very underratedly good album. High points are obviously Three Days, Stop, Been Caught Stealing. Recommend listening to their live album if you haven't checked it out yet.