Dear Science (studio album) by TV On The Radio 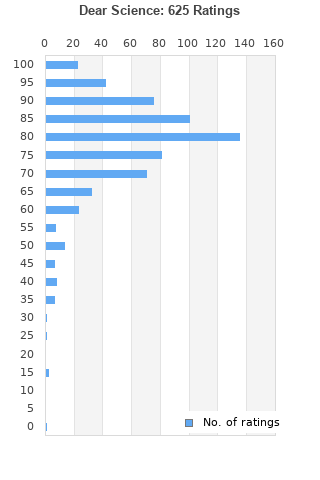 TV On The Radio bestography

Dear Science is ranked as the best album by TV On The Radio.

VEERS with Radio Decay And Creeper the dog
The Nick, Birmingham, United States. 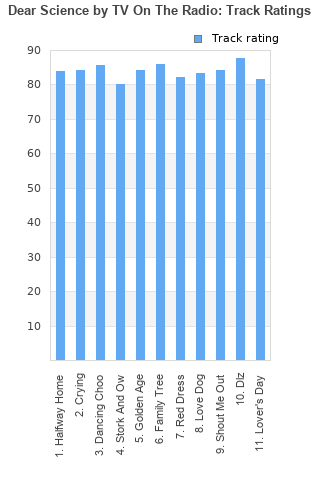 Rating metrics: Outliers can be removed when calculating a mean average to dampen the effects of ratings outside the normal distribution. This figure is provided as the trimmed mean. A high standard deviation can be legitimate, but can sometimes indicate 'gaming' is occurring. Consider a simplified example* of an item receiving ratings of 100, 50, & 0. The mean average rating would be 50. However, ratings of 55, 50 & 45 could also result in the same average. The second average might be more trusted because there is more consensus around a particular rating (a lower deviation).
(*In practice, some albums can have several thousand ratings)
This album is rated in the top 3% of all albums on BestEverAlbums.com. This album has a Bayesian average rating of 78.5/100, a mean average of 77.6/100, and a trimmed mean (excluding outliers) of 78.6/100. The standard deviation for this album is 14.0.

A very enjoyable and experimental album but it is to inconsistent to be amongst the greatest in my opinion. There are some truly amazing and infectious tracks on here such as the well known hits like DLZ but there are also some deeper cuts that are very enjoyable like Shout Me Out. The melodies are genius and I love the combination of beats and brilliant instrumental performances that create such a unique sound for this group. This sound separates them from their competition and I think it is best demonstrated on this release. There is great lyricism in places as well. However, there are 3 or 4 weak tracks and the closing track is so unnecessary and probably should be removed due to its poor lyrics. Furthermore, the record never truly stuck with me either and there was never anything really to keep bringing me back to this record. While 7 or 8 of the tracks are great there isn't really any songs that transcend that which holds the album back as it needs a few more incredible songs. Overall, an album I love very much and enjoy every time I listen to it but it is just held back in terms of quality by a couple of factors.

The first time NME hype got me to listen to an album that i actually enjoyed. At the time it was my 2nd favorite album of the year, but not much more than that. I enjoyed the singles and all.
However it has stuck with me, In a way i couldn't have predicted, now there isnt a song in it I dont like.
Emotionally i guess it just took a while and some life events for me to truly connect to it.

also my opinion this album gets better and better through time.

Probably my favorite album by TV on the Radio, Dear Science is impressively catchy and emotional. I can't help but dance around the house when I have this on, and they keep that momentum song after song. I love almost every single song on this recording.

A criminally underrated piece of art.

Glimmering melodies, wonderful lyricism, and unparalleled authenticity. One of the best albums of its era.

This is the peak of their experimental indie-soul-funk-electro-post punk formula. Some of this stuff is punchy as hell when done live. Such an upbeat, melodic, soulful album that resonates deeply with those who like their music with a bit of extra reach.

ALBUM HIGHLIGHT: There is a very satisfying slow build to the opening track, Halfway Home, which ends in a cacophonic crescendo. I am also a fan of the more contemplative tracks; Stork and Owl with its strings accompaniment, and Family Tree with its piano. Both fit seamlessly in amongst the more typically upbeat tracks on the album.

I think the real highlight is the eclectic quality of the album.

If I were to describe TV on the Radio to someone who hadn't heard of them, they're like Prince meets Joy Division; they have Prince's falsettos mixed with the guitar (often bass-heavy) riffs of Joy Division.

The best songs are 'Dancing Choose', 'Shout Me Out' and 'DLZ', but there are several other great tracks on the album really. I do find it puzzling that TV on the Radio's critical acclaim doesn't match their reception on sites like this one, they have everything a hipster could want: they're influenced by some of the greats, David Bowie talked about how much he loved them (he sung on Return to Cookie Mountain) and they have introspective, esoteric lyrics.

I couldn't choose between 'Return to Cookie Mountain' and 'Dear Science' for my favourite TV on the Radio album, you should give them both a listen.

I couldn’t really get into this album, agree with previous posts DLZ is the best track here. The final track LOVERS DAY contains some truly cringe worthy lyrics, try this on for size:
“ Break the bed and crash the floor , stop laugh and scream & have the neighbors call the cops “

Good album, would probably be a good place to start for people who want to get into indie music.

Your feedback for Dear Science