Only By The Night (studio album) by Kings Of Leon 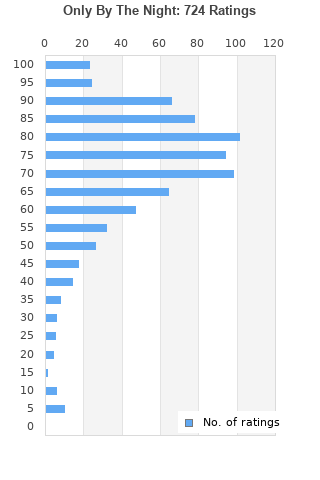 Only by the Night - Audio CD By Kings of Leon - VERY GOOD
Condition: Very Good
$5.15

Only By The Night is ranked as the best album by Kings Of Leon. 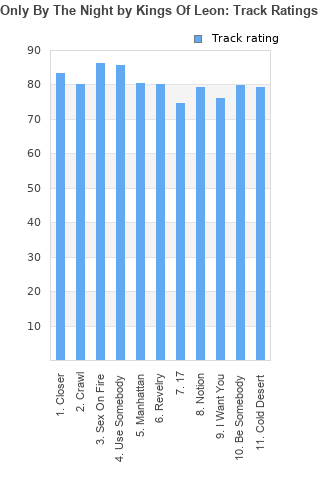 Only By The Night rankings

Only By The Night collection

Only By The Night ratings

Rating metrics: Outliers can be removed when calculating a mean average to dampen the effects of ratings outside the normal distribution. This figure is provided as the trimmed mean. A high standard deviation can be legitimate, but can sometimes indicate 'gaming' is occurring. Consider a simplified example* of an item receiving ratings of 100, 50, & 0. The mean average rating would be 50. However, ratings of 55, 50 & 45 could also result in the same average. The second average might be more trusted because there is more consensus around a particular rating (a lower deviation).
(*In practice, some albums can have several thousand ratings)
This album has a Bayesian average rating of 72.4/100, a mean average of 70.8/100, and a trimmed mean (excluding outliers) of 72.3/100. The standard deviation for this album is 18.4.

Only By The Night favourites

Only By The Night comments

Unfortunately Sex On Fire and Use Somebody were massively overplayed which probably leads to me rating it lower than it should be, but they are awesome. I Want You, Be Somebody and Revelry are also great. A must-listen.

I didn't really like this album too much the first couple of listens - probably not the type of band that I would follow. I first heard this album in 2016 but was familiar with the big hits. The album slowly grew on me the more I listened to it - I felt the same with the Foo Fighters.
But this album opens with "Closer" and ends with "Cold Desert" which are now amongst my favourite songs.

The run from Sex on Fire till Revelry is a relentless flawless streak of mad genius. I dont know how/why i ended up loving those 4 songs so much, but they havent aged a day after all this time and i only love them more with every listen.

The rest of the album has eventually grown on me, notion and closer are fine songs, but i am mostly here for those 4 songs.

Favorite Songs: Manhattan, Use Somebody

Today (January 2018)I listened to this album 10 years since it first came out in 2008 & the verdict ? It definitely has aged and not in a good way.

The opening 4 tracks up to and including Use Somebody are great , from here on the tracks are VERY average bordering on fillers .

Interesting fact this album is BEA ranked 503 so there's plenty of punters who rate this album , I'm not one of them though.

Really enjoyed listening to this album. Use somebody is such a great song!

An old-fashioned AOR record in that it contains a few standout radio hits and a bunch of filler. This band has been beat up by music fans in the years since this came out, mainly because they seem to be sort of a band for "bros" and fratboys and their music is a bit chest-thumpy, and they even became notorious for antigay comments, so I'm trying to be fair here, because I'm not sure if their reputation is warranted. Maybe they're not all that bad. The fact is, though, that besides about three songs, this album proved to be boring and I had to permanently put it aside. Maybe if the production weren't so bombastic it might be easier to get through the whole thing. (I had a physical CD copy that I bought, so I did give it more than enough chances.)

Some interesting parts on this one, but not nearly enough to warrant 54 minutes of this stuff. Guitar carries the whole album, because the lyrics and vocals certainly don't. I don't know, maybe this kind of music just isn't for me.
Best Tracks: Closer, Use Somebody, 17.
Worst: Sex On Fire, Be Somebody.

Your feedback for Only By The Night