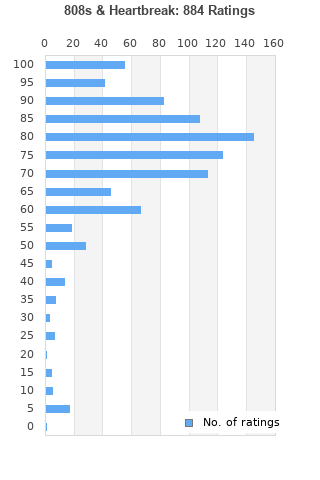 808s & Heartbreak is ranked 7th best out of 14 albums by Kanye West on BestEverAlbums.com.

The best album by Kanye West is My Beautiful Dark Twisted Fantasy which is ranked number 32 in the list of all-time albums with a total rank score of 31,097. 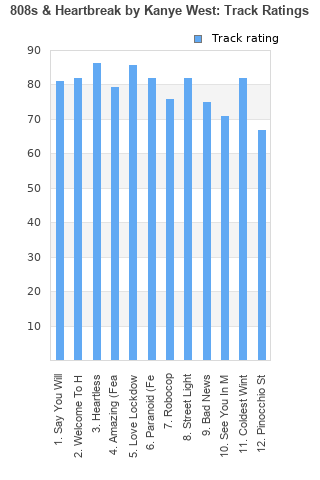 Rating metrics: Outliers can be removed when calculating a mean average to dampen the effects of ratings outside the normal distribution. This figure is provided as the trimmed mean. A high standard deviation can be legitimate, but can sometimes indicate 'gaming' is occurring. Consider a simplified example* of an item receiving ratings of 100, 50, & 0. The mean average rating would be 50. However, ratings of 55, 50 & 45 could also result in the same average. The second average might be more trusted because there is more consensus around a particular rating (a lower deviation).
(*In practice, some albums can have several thousand ratings)
This album is rated in the top 8% of all albums on BestEverAlbums.com. This album has a Bayesian average rating of 76.0/100, a mean average of 73.8/100, and a trimmed mean (excluding outliers) of 76.0/100. The standard deviation for this album is 18.7.

This is album is very front heavy with the songs nearer the conclusion being a bit weaker and the closing track being one of my least favourite Kanye songs ever. When the album is good though it is amazing. Songs like Heartless, Welcome To Heartbreak, Paranoid, Amazing and Love Lockdown is where this album peaks with all of these songs sounding fresh and very cutting edge. They are rich and detailed and Kanye really paved the way for future artists with the style of music he is performing on these tracks. The record slowly tails off after this until it reaches the end. There is quite a few tracks that are skippable and some that should be removed entirely but if you have just the first 35 minutes of music on this album this could possibly be his best work. Overall, this record is full of potential which slowly drifts away as the edge is slowly lost in the music.

This was my first Kanye album and I thought it was ok. But the earlier stuff and then MBDTF surpass this effort. It is a definite departure from those earlier albums and to where he returned after this album. Amazing and See You IN My Nightmare are best tracks for me

Real mixed bag. On one hand you have probably my favorite Kanye track with Paranoid, but on the other hand you have by far my least favorite song by him with Pinocchio Story. I don't even care that the audio quality is crap on it, it's just straight up bad as a whole. "I WANNA BE A REAL BOY!", makes me physically hurt. Also, autotune does not sound as cool as Kanye seems to think it is. But the more synthpop influenced cuts are pretty solid.

I appreciate how Kanye is envelope-pushing here, but it's not my favorite collection of tracks.

So so so influential

It's entirely different, and yet again he pulls it off, once again influencing the sound of the genre.

Tbh, this is my favorite of Kanye's solo albums

Kanye played a big part in the sound of modern hip hop/r&b and this album was the key. The mixing across the album is really great, as if he suddenly got the ability to mix for stereo.. it's hard to explain. It's similar in ways to the way a lot of early 80s albums were mixed for hi-fi, very wide and sparse.

Your feedback for 808s & Heartbreak