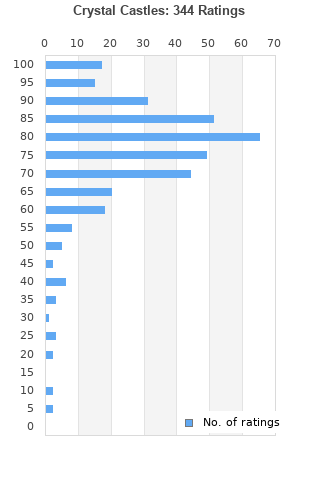 CD Album: Crystal Castles, Fainting Spells/Celestica/Doe Deer.....
Condition: Very Good
Time left: 22h 33m 25s
Ships to: Worldwide
£3.00
Go to store
Product prices and availability are accurate as of the date indicated and are subject to change. Any price and availability information displayed on the linked website at the time of purchase will apply to the purchase of this product.  See full search results on eBay 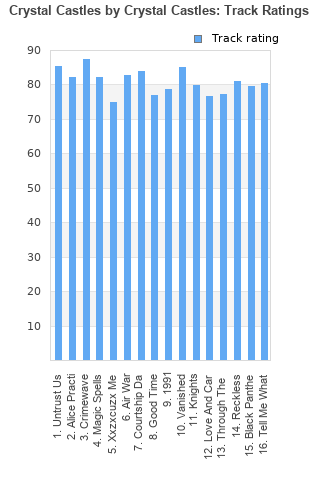 Rating metrics: Outliers can be removed when calculating a mean average to dampen the effects of ratings outside the normal distribution. This figure is provided as the trimmed mean. A high standard deviation can be legitimate, but can sometimes indicate 'gaming' is occurring. Consider a simplified example* of an item receiving ratings of 100, 50, & 0. The mean average rating would be 50. However, ratings of 55, 50 & 45 could also result in the same average. The second average might be more trusted because there is more consensus around a particular rating (a lower deviation).
(*In practice, some albums can have several thousand ratings)
This album is rated in the top 7% of all albums on BestEverAlbums.com. This album has a Bayesian average rating of 76.4/100, a mean average of 74.8/100, and a trimmed mean (excluding outliers) of 76.5/100. The standard deviation for this album is 16.5.

I feel like Crystal Castles capitalized on the electro-pop/rock phase of the 2000s here. This is one of the albums that started my obsession with noisier music in general.

A strange album that forces its way in and out of pleasure for the listener.

Forever thankful for this album because it got me into electronic music. Personally to me it is one of those moments where you are like "Wow I didn't know music can sound like this". Objectively speaking, this album does have flaws and has some filler tracks mostly because CC just wanted to put out as much material as possible on their first big release. Still contains many classics and I always find myself going back to it.

Agree with Connor! And I don't get how some see it as pretentious?

Really enjoy listening to this. its fun and IMO underrated on this site.

It's not that bad. I managed to find some good tracks in here, like Magic Spells, Reckless, and the closer Tell Me What to Swallow. It's a shame that there weren't more songs like that closer because eventually a lot of those bleeps and bloops kind of blur together to where it's hard to separate one track from another with the exception of the songs that I listed.

Your feedback for Crystal Castles