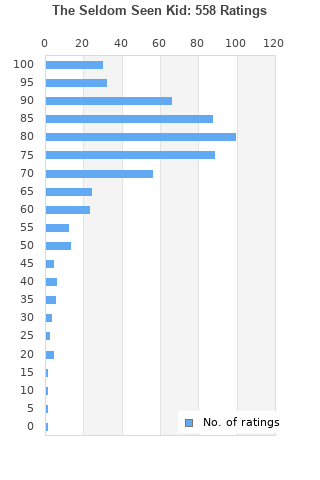 The Seldom Seen Kid is ranked as the best album by Elbow. 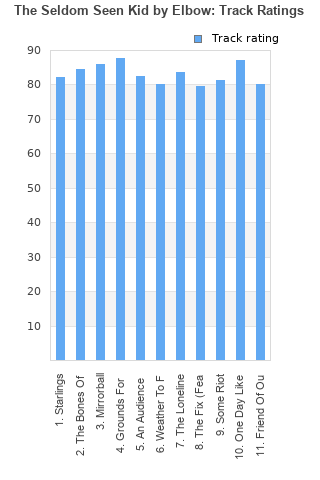 Rating metrics: Outliers can be removed when calculating a mean average to dampen the effects of ratings outside the normal distribution. This figure is provided as the trimmed mean. A high standard deviation can be legitimate, but can sometimes indicate 'gaming' is occurring. Consider a simplified example* of an item receiving ratings of 100, 50, & 0. The mean average rating would be 50. However, ratings of 55, 50 & 45 could also result in the same average. The second average might be more trusted because there is more consensus around a particular rating (a lower deviation).
(*In practice, some albums can have several thousand ratings)
This album is rated in the top 3% of all albums on BestEverAlbums.com. This album has a Bayesian average rating of 78.1/100, a mean average of 77.0/100, and a trimmed mean (excluding outliers) of 78.2/100. The standard deviation for this album is 15.7.

I’ve never understood the Elbow thing finding various albums in their catalogue competent enough but ultimately a bit of a snooze feast, however this one actually has some interesting moments and in particular the Un-Elbow (which is probably why I dig it) track “The Fix”

Elbow are one of my favourite bands, and the best live band I've seen by far. This album has a few filler tracks in the middle, but the fact that even with these I still give it a 100/100 rating says a lot. Highlights are One Day Like This, Grounds for Divorce, The Bones of You and the final track Friends of Ours which is just a beautiful track, especially when you find out who the subject of the song is and the story behind it. I love Guy Garvey's lyrics and this album has a few gems - my favourite being "You are the only thing in any room you're ever in" from Starlings. And love the lyrics on An Audience with the Pope - "I have an audience with the pope and I'm saving the world at 8, but if she says she needs me everybody's gonna have to wait". I'm quite surprised this album isn't higher up on the overall chart.

Whenever someone using the adjective "mature" to describe music I cringe. Yet I also think of this album

He sounds a bit like Damon Albarn, but other than that the first three songs are really well-written, calming and soulful. Then he comes with a macho, arena rock-ish track, which confused me a lot and sounds like shit. But after that he goes back to what he's good at. Overall, a great experience, but one song needs to be amputated (but that doesn't influence my rating though). Not often do my opinions on songs change so wildly from track to track on the same album.

Elbow have always been a bit arty, but they give this aspect of their music a full flourish on this album. It is a great album, but just suffers a little from being a little too earnest in places. It's not that music shouldn't be heartfelt - it should - it's just that sometimes it can seem a little forced. The strings are great, the songwriting is excellent, and the playing matches it all... just dial down the boy-band emotion a little.

Approachable enough, but it's not immediately apparent to me why it's so highly regarded.

Fine acoustic based rock. But without wanting to sound too cruel, nothing you haven't heard before. Quite surprised it's in the 300's on this site.

The major breakthrough album from Elbow, and one of their best. Full of great songs with Guy Garvey's Peter Gabriel like vocals on top form throughout. Great songs in, grounds for divorce, tower crane driver, and, the fix. Excellent.

Your feedback for The Seldom Seen Kid