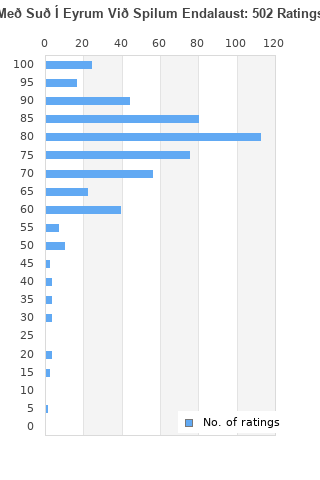 The best album by Sigur Rós is Ágætis Byrjun which is ranked number 64 in the list of all-time albums with a total rank score of 23,012. 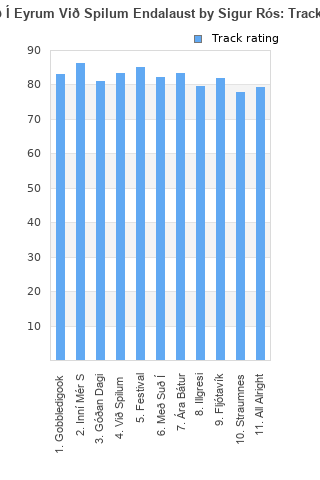 Rating metrics: Outliers can be removed when calculating a mean average to dampen the effects of ratings outside the normal distribution. This figure is provided as the trimmed mean. A high standard deviation can be legitimate, but can sometimes indicate 'gaming' is occurring. Consider a simplified example* of an item receiving ratings of 100, 50, & 0. The mean average rating would be 50. However, ratings of 55, 50 & 45 could also result in the same average. The second average might be more trusted because there is more consensus around a particular rating (a lower deviation).
(*In practice, some albums can have several thousand ratings)
This album is rated in the top 4% of all albums on BestEverAlbums.com. This album has a mean average rating of 76.0/100. The trimmed mean (excluding outliers) is 77.4/100. The standard deviation for this album is 14.2.

Drawn to this band through reviews on this site earlier in 2018 and got the excellent Ageatis Bryjun which led me into this album. Although not as strong an album I love the feel of the songs and the album as a whole. So laid back and spacious.

An interesting album. Sigur Ros definitely shines more on the longer songs here, where they have more time to really build something from the ground up. But some of the songs can also sound a bit formulaic, like their just trying to create Takk again. Overall, a good listen though

Another album I have listened to numerous times before commenting. I like my music and have quite an eclectic collection, but I never thought I'd be listening to, and enjoying immensely, an album in Icelandic. The music is enthralling, a bit of a fucker to sing along to, admittedly, but I love it. If they've done better albums than this I can't wait to get hold of them. It maybe tails off a bit towards the end but overall it's very good.

This is happen when the sun comes to Iceland.

Melancholy and perfect on a rainy day or late at night. Excellent music and vocals. Great record!

Very good album. Diverse, sad, contemplative and joyfull . And yet, only their third best in my opinion. Following Takk and Agaetus

too sweet for me

This is the cross-section that Sigur Rós NEEDED to find. And, of course, they found it; the cross-section between enjoyable and ethereal. Now, from this, I'm not saying that Agaetis Byrjun isn't enjoyable, but not in the sense that Med Sud is. It's a lot more fun and youthful than Agaetis Byrjun is, whereas it has less power and takes a lot more to hit you. However, there are some solid tracks in this album.