1 (compilation album) by The Beatles 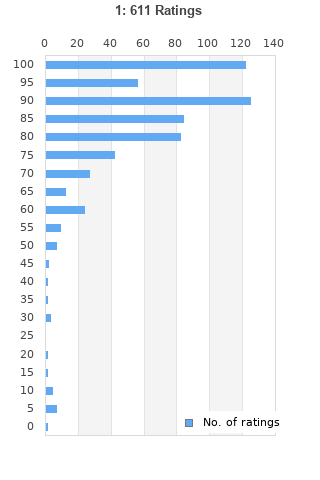 1 is ranked 15th best out of 65 albums by The Beatles on BestEverAlbums.com.

The best album by The Beatles is Abbey Road which is ranked number 3 in the list of all-time albums with a total rank score of 76,930. 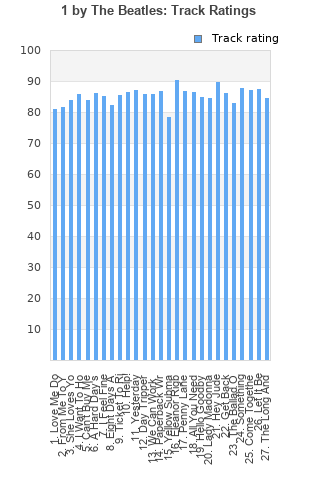 Rating metrics: Outliers can be removed when calculating a mean average to dampen the effects of ratings outside the normal distribution. This figure is provided as the trimmed mean. A high standard deviation can be legitimate, but can sometimes indicate 'gaming' is occurring. Consider a simplified example* of an item receiving ratings of 100, 50, & 0. The mean average rating would be 50. However, ratings of 55, 50 & 45 could also result in the same average. The second average might be more trusted because there is more consensus around a particular rating (a lower deviation).
(*In practice, some albums can have several thousand ratings)
This album is rated in the top 1% of all albums on BestEverAlbums.com. This album has a Bayesian average rating of 85.5/100, a mean average of 83.5/100, and a trimmed mean (excluding outliers) of 85.7/100. The standard deviation for this album is 17.5.

This is a great album to own if you’re a casual Beatles fan at best and mostly just want a good collection of their much more poppier and mainstream hits instead of their really experimental stuff that everyone loves so much.

Great album for a great band. To have so many number 1's of such quality. I get frustrated by comments here about songs missing - it is their Number 1's, not their "best" songs

An alright compilation. You'd be better off getting the 'red 1962-1966' & 'blue 1967-1970' compilations instead if you want to cover more ground. Lot more songs, all of them top notch. Overall, they are much better than this one as a whole.

Arguably the best compilation album of all time. All killer and no filler. Absolute perfection from start to finish. It doesn’t get better than this.

Onater and Ledzep. The whole point of this album was to include all The Beatles number one hit singles (not album tracks) both UK and US on one CD. It's not a 'best of' or 'personal favourites' it's the songs that reached number one on the singles charts in the UK and the US in chronological order. Nothing less, nothing more. You may love, Tomorrow never knows, I am the walrus, and, Blackbird, but they weren't released as singles, let alone reach number one, and that's why they are not included. The clue to the album is in the title.

The problem with Beatles greatest hits compilations is that they are such a legendary band that it's practically impossible to gather all of their best songs onto one album without still leaving out plenty of the most famous songs ever written. This compilation tries to do so statistically, including all of their songs that reached number one on the charts, but still leaves out, among countless others, I Saw Her Standing There, Twist And Shout, All My Loving, Norwegian Wood, Nowhere Man, In My Life, Taxman, Tomorrow Never Knows, Lucy In The Sky With Diamonds, A Day In The Life(!), Strawberry Fields Forever, I Am The Walrus, Blackbird, Revolution, Helter Skelter, While My Guitar Gently Weeps, Here Comes The Sun, and Across The Universe, all of which I would consider to be some of the most widely known songs in music history. There really is no way around this, but it renders this, and most other Beatles compilations with the exceptions of maybe the red and blue albums, kinda pointless.

It's compilation and it has many flaws because of that (not cohesive, doesn't contain any interesting "album gems", etc.), but it's their best selling album even though it was released 30 years after they broke up. Just shows you how big they are/were.

The most important band of all time

This could be a compilation of the best tracks ever in the history of music, yet it’s by the ONE band! . Think about that for a minute? Even in 2017 that thought still blows my mind. As easy 100/100 rating I will ever rate on this site. Timelessly perfect from track 1 to 27