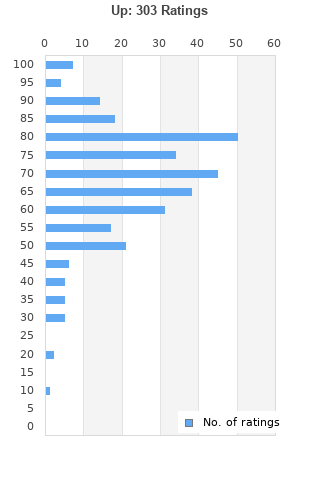 Up is ranked 11th best out of 35 albums by R.E.M. on BestEverAlbums.com.

The best album by R.E.M. is Automatic For The People which is ranked number 52 in the list of all-time albums with a total rank score of 21,458. 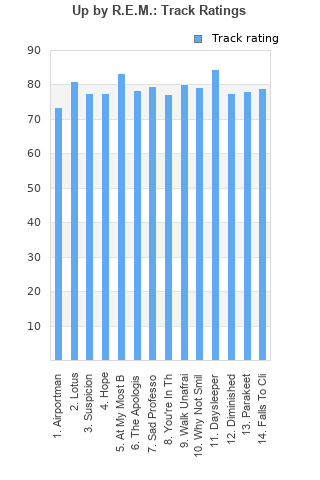 Rating metrics: Outliers can be removed when calculating a mean average to dampen the effects of ratings outside the normal distribution. This figure is provided as the trimmed mean. A high standard deviation can be legitimate, but can sometimes indicate 'gaming' is occurring. Consider a simplified example* of an item receiving ratings of 100, 50, & 0. The mean average rating would be 50. However, ratings of 55, 50 & 45 could also result in the same average. The second average might be more trusted because there is more consensus around a particular rating (a lower deviation).
(*In practice, some albums can have several thousand ratings)
This album has a Bayesian average rating of 69.1/100, a mean average of 68.4/100, and a trimmed mean (excluding outliers) of 69.0/100. The standard deviation for this album is 15.3.

Haha third favorite? Now I consider it my favorite pretty much tied with Automatic and then Pageant. It's beautiful!

Love this album! Different than their old sound for sure but in a wonderful way. Might have been liked more if it was a Stipe solo album instead. I've never been against a change in sound just as long as a band can make it work. It's my third favorite REM album. Definitely consider it underrated.

I don't get it. They pretty much lost me at Automatic for the People. I'm sure I'll give this another chance though.

A friend of mine once said ' I just don't get UP' !
I've never forgotten that and I could not disagree more , Up is a really solid album deserving a listen . But lets be honest here its not R.E.M's best album as mentioned in previous posts , it just isn't and TBH doesn't come close.
So yeah I totally GOT Up and return to it from time to time . Oh and At My Most Beautiful is one of my most favored R.E.M tracks .

You know, each song on "Up" is pretty decent. However, considering that this album is over one hour in length, it almost feels like an eternity. Pleasant sounds throughout, but the songwriting is extremely monotonous.

Cant believe this is 11th. Like Gary this is my favourite REM album ahead of Automatic Murmur and Fables. For me its flawless and a beautiful sound. maybe not enough energy for some but I think its a masterpiece.

I must confess, this is my favourite REM album. After Bill Berry left the band had to do something different and this a great leftfield turn. There's certainly no rockers on here, it's more of an electronic album. I wouldn't say there's any great individual tracks, maybe apart from at my most beautiful, a wonderful Beach Boys pastiche, but it's got a real album feel. Daysleeper, is about the only song on the album that has that conventional REM sound, but that's a good thing, it's what the band needed to do. Opener, airportman, is probably the weirdest thing the band ever did. In fact, if it wasn't for Michael Stipe's voice you wouldn't know it was REM at all. It's definitely their best without Berry with, you're in the air, sad professor and walk unafraid personal faves. Other good tracks are the lovely, suspicion, the apologist, and closing track, fall to climb. Diminished, and, hope(which features the music from Leonard Cohen's, Suzzanne), are also excellent. Great album if you give it enough spins. Their last great album.

More low key and there's a bit of an electro vibe involved here. Gets off to a slow start but once it finds its rhythm it's extremely beautiful

An okay album for me, there's some good tracks but nothing that really really stands out. Then again this is 3-piece R.E.M. first effort.

More energy would have been appreciated. The songs are good, but the album is a bit "tiring". The problem is not entirely the sound, but the general approach to the songs.

Your feedback for Up