Fables Of The Reconstruction (studio album) by R.E.M. 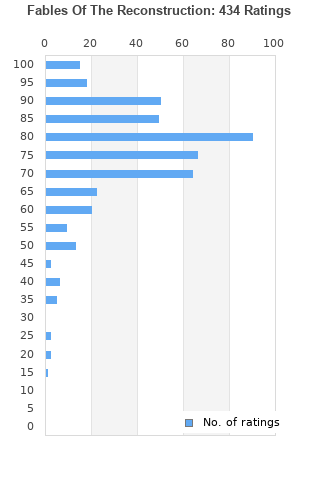 Fables Of The Reconstruction is ranked 10th best out of 35 albums by R.E.M. on BestEverAlbums.com.

The best album by R.E.M. is Automatic For The People which is ranked number 52 in the list of all-time albums with a total rank score of 21,467. 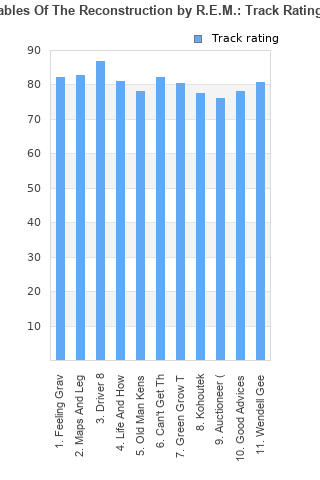 Fables Of The Reconstruction rankings

Fables Of The Reconstruction collection

Fables Of The Reconstruction ratings

Rating metrics: Outliers can be removed when calculating a mean average to dampen the effects of ratings outside the normal distribution. This figure is provided as the trimmed mean. A high standard deviation can be legitimate, but can sometimes indicate 'gaming' is occurring. Consider a simplified example* of an item receiving ratings of 100, 50, & 0. The mean average rating would be 50. However, ratings of 55, 50 & 45 could also result in the same average. The second average might be more trusted because there is more consensus around a particular rating (a lower deviation).
(*In practice, some albums can have several thousand ratings)
This album is rated in the top 6% of all albums on BestEverAlbums.com. This album has a Bayesian average rating of 76.2/100, a mean average of 75.7/100, and a trimmed mean (excluding outliers) of 76.3/100. The standard deviation for this album is 14.2.

Fables Of The Reconstruction favourites

Fables Of The Reconstruction comments

I think of the first three R.E.M. albums as a suite. A journey from youth to experience. It was my own journey too, having discovered the band at the time of Murmur. I love many of their other albums as well, particularly Automatic but these are the ones that still resonate to me down the years. This should definitely be Top 1,000. It gets stronger for me all the time.

The idea that this isn't rated as one of their top 3 best is ridiculous. Perfect representation of REM just perfectly in between Indy and sold-out genres.

IMO, REM's best. The most great songs and the most consistent among the deep cuts as well. The only REM album still in regular rotation with me.

Brilliant, the album that made me fall in love with REM & follow their entire career as my all time favourite band . What a trilogy REM produced beginning with Fables , into Lifes Rich Pageant and closing with Document a 3 album masterpiece only bettered by The Fab Four . The tension between band members is palpable on this album best demonstrated by the off key guitar separation which brings Feeling Gravitys Pull to a close . Breath taking album

Outstanding throughout ....... Right behind murmur in their catalog imo.

REM's third album is actually my favourite of their early records, it has a very rustic feel, their first genuine Americana moment, featuring tales of the great outdoors, of railroads, and, old men with stories to tell. It's REM as The Band. It's got some of their best early songs, feeling gravitas pull, driver 8, and, old man Kensey, are all great, as are, green grow the rushes, and, maps and legends. In fact It's all great, the most atmospheric of the band's early records. It ends nicely with the beautiful, Wendell Gee. It all sounds like it was recorded in a barn, or around a campfire. This is REM in the great wide open. Brilliant.

This one falls a bit short towards the end, and is very dark as well, still very good though

I think the most underated of R.E Ms 80's albums, only tapers off a bit towards the end but as good as any other than the big 3 (AFTP, Murmur and LRP) im my mind.

I just signed up so that I can set the record straight about Fables...This is a beautiful album! It has several outstanding tracks, the best of which is "Life and How to Live It". "Maps and Legends", "Driver 8", "Can't Get There From Here", "Green Grow the Rushes", "Wendell Gee", hell the whole album is fantastic. This is where in my opinion the band really found their sound that would catapult them into the one of the best artists on the planet for the next decade or so. I feel FOTR is highly undrrated by both this site and other members.

This is another good R.E.M. I can agree with others that it's underrated and not as average many would say. But I don't it's memorable as Murmur or Life's Rich Pageant

Your feedback for Fables Of The Reconstruction