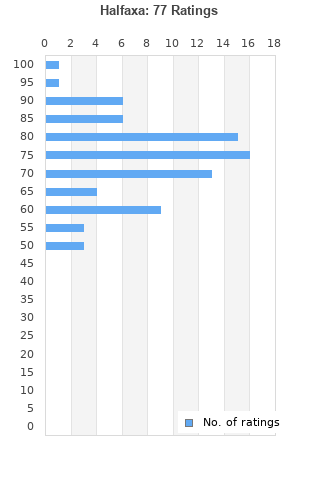 Halfaxa is ranked 4th best out of 7 albums by Grimes on BestEverAlbums.com.

The best album by Grimes is Art Angels which is ranked number 412 in the list of all-time albums with a total rank score of 4,804. 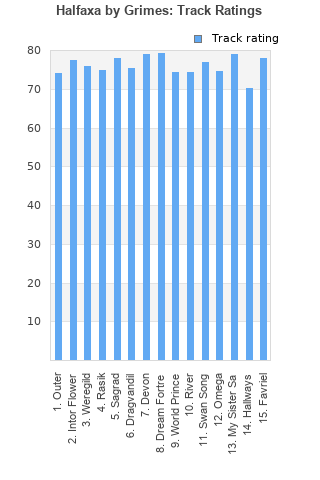 Rating metrics: Outliers can be removed when calculating a mean average to dampen the effects of ratings outside the normal distribution. This figure is provided as the trimmed mean. A high standard deviation can be legitimate, but can sometimes indicate 'gaming' is occurring. Consider a simplified example* of an item receiving ratings of 100, 50, & 0. The mean average rating would be 50. However, ratings of 55, 50 & 45 could also result in the same average. The second average might be more trusted because there is more consensus around a particular rating (a lower deviation).
(*In practice, some albums can have several thousand ratings)
This album has a Bayesian average rating of 73.9/100, a mean average of 74.0/100, and a trimmed mean (excluding outliers) of 74.0/100. The standard deviation for this album is 10.9.

Here we see Grimes at her most mysterious and ethereal. Why 'Dream Fortress' isn't rated higher on here, I don't know. It's one of her greats for sure.

A step up from Geidi Primes but still not as good as what was to come. Fun record and cool atmospheres tho.

Sounds that you find scary at first, might become your dark friends one time. You start to learn how to interact and how to feel in their presence. I don't even know what halfaxa means, but it has become a close friend of mine. We spend a lot of time just sitting on a hill and watching the dark shadows on the night sky. We share a lot of feelings, and enter oblivion, together.
My love with this album started with an unofficial music video of "Dream Fortress" on Youtube. It wasn't like music videos that grimes would be the director, but still really amusing. I gave this album just one listen before seeing that video, and that video made me give it another try. Halfaxa is a beast. It is not friendly in the beginning, you will get used to after spending some time, trying to get closer and closer, until it lets you in its dark but fantastic world.
Grimes is really becoming the best artist of the decade if she keeps going on like this. She knew the neural networks of enjoyment of music since she was born, so she had to release the sounds.