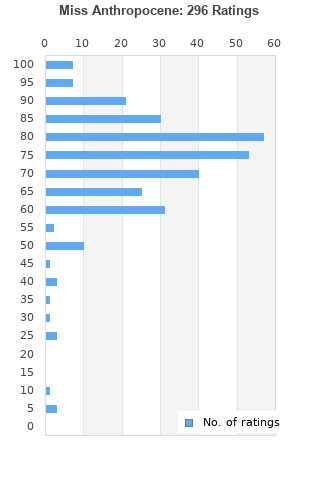 Miss Anthropocene is ranked 3rd best out of 7 albums by Grimes on BestEverAlbums.com.

The best album by Grimes is Art Angels which is ranked number 416 in the list of all-time albums with a total rank score of 4,601. 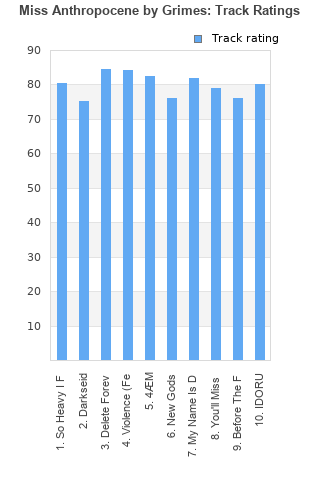 #
Track
Rating/Comments
1.
So Heavy I Fell Through The Earth (Art Mix)
Rating: 80 (75 votes)Comments:

Rating metrics: Outliers can be removed when calculating a mean average to dampen the effects of ratings outside the normal distribution. This figure is provided as the trimmed mean. A high standard deviation can be legitimate, but can sometimes indicate 'gaming' is occurring. Consider a simplified example* of an item receiving ratings of 100, 50, & 0. The mean average rating would be 50. However, ratings of 55, 50 & 45 could also result in the same average. The second average might be more trusted because there is more consensus around a particular rating (a lower deviation).
(*In practice, some albums can have several thousand ratings)
This album is rated in the top 23% of all albums on BestEverAlbums.com. This album has a Bayesian average rating of 74.5/100, a mean average of 73.1/100, and a trimmed mean (excluding outliers) of 74.6/100. The standard deviation for this album is 15.3.

It's really good and Grimes is pretty much untouchable at this point. I still prefer Art Angels and Visions but this is hardly a disappointment. It actually feels like a pretty natural progression from Visions but keeping the Art Angels depth and textures & some elements from the arrangement. Much more dark and distant than her other work although really darkness and distance has been a part of her work.

But whereas Art Angels you'd still feel pretty upbeat when she's singing about California treating her bad, on Miss Anthropocene the pop melodies are still there in songs like "My Name is Dark" but it's more of gasping for breathe in awe of the massive sound she can create in times, as opposed to ear candy.

In fact the sound is probably as "full" as any sound she's created. I still think Visions was crazy dense sounding given the sparse arrangement but compared to the relatively well-contained Visions, Miss Anthropocene is sprawling in and out of space and time.

She pushes the boundaries of pop in sometimes the most frustrating ways, because she balances songwriting and aesthetic so seamlessly that as the listener you think "oh there's a catchy hook" and then it's like "nope I was just setting you up for these few measures of texture" while still being clearly pop music but that's patently Grimes. It's hard to not appreciate her intent.

Look up "We Appreciate Power" off of the deluxe edition of this album. It's probably better than any individual song on this and possibly one of the best Grimes songs in her discography.

After not being a huge fan of Visions, I always think I don't like Grimes. But I've been so into her last two albums. I haven't listened to Art Angels in about four or five years, but this one might be my favorite of hers. Terrific album.

I'm a fan of Art Angels and Visions but this one has just left me cold. A couple of interesting moments but they're few and far between.

Honestly, I'm not impressed, I was waiting for the album to be over.

Nice sounding and ethereal. Enjoyable listen but nothing that blew me away.

Despite seemingly carrying the weight of the world on her shoulders, MA feels like a smaller and more subdued album compared to Art Angels.

A late 90's state of mind is heavily noticeable, not only with the echoed-out breathy vocals and muffled-but-heavy guitars prevelant on the second half, but also in it's sense of hazy doom and resolutely poker-faced symbolism. While the first half may have the "hits", in many ways I prefer the more massaged-out "We Appreciate Power"-style second mainly because it feels more interconnected and she actually seems to be having some geniune fun with the songs as well. However, there's just no denying there's a sense of whiffed oppurtunity despite nearly all of the songs being consistently easy on the ears (though nothing I would call outstanding either- those waiting for a "Realiti", "Vanessa" or "Oblivion"-like game-changer are sure to be dissapointed), and a major suspicion that there's a key middle and penultimate track missing from the picture that would've given it a fuller and more cohesive sound overall. A few listens in I'm not much clearer on what's the overlying message here, other than humans continuously devouring the planet and themselves=BAD.

So, donno, can't really call this a misfire since there wasn't anything here I particularly disliked, but the final impact was pretty minimal to *ahem* say the least. Maybe there's a weirder version out there somewhere, or we'll just have to wait till next time when she can get a bit riskier- or clearer in what she's actually trying to achieve. This is fine for now, I guess.

This album makes Art Angels look like an outlier in her discography cuz this feels like a closer sonic successor to Visions. It pulls back on a lot of the bombast of Art Angels, for better or worse, but its not necessarily a decline in quality. But that also makes it easier to explore, fall in love with, and then eventually outgrow the initial rush. This is my opinion so far. I can stil listen to Art Angels any day and it sounds how it did that first month i listened to (and died over) it, but I feel like Miss_Anthropocene won't have the same longevity.
Its still a solid album throughout though. Grimes is a crazy person and I love it! It takes a crazy person to make fucking 4aem (my favourite off the album), Darkseid and My Name Is Dark.

I don't know why, but I sort of expect more. Something more...wierd, out there. This is a nice album and it has nothing wrong with it. The expectation with Grimes is that she will do something absolutely unique.

Your feedback for Miss Anthropocene